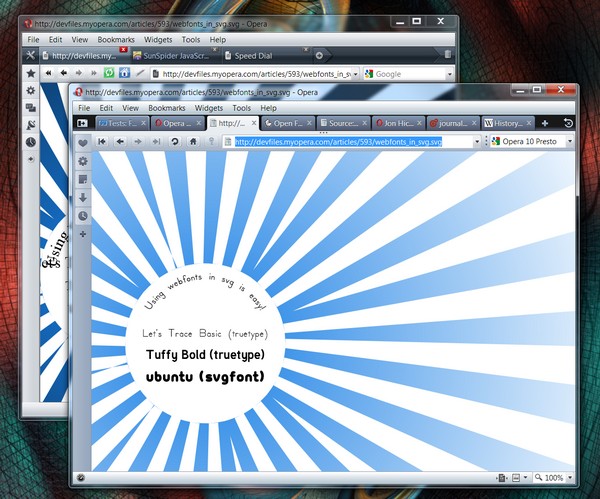 The developers at Opera Software have been publicly working with version 2.2 of the Presto rendering engine for its premier Web browser since last December. Their goal has been to implement Web fonts for Scalable Vector Graphics without sacrificing performance or other standards support. Conceivably, this could allow sites to deploy both TrueType and SVG fonts in user-scalable sizes scaled to fit the current window size, as this recent Opera test pattern demonstrates. (Right now, Firefox 3.5 Beta 4 supports some scalable TrueType, but not to the degree that Opera does.)

It's an impressive renderer, and in early Betanews tests, it appears to be the engine of a snappy and stable browser. But Opera 10 may not have an opportunity to be released to the public before Mozilla cuts the ribbon on Firefox 3.5. When that day arrives, Opera 10 could flip-flop from being 28% ahead of Mozilla in overall performance to being 57% behind it, according to performance tests on a physical platform. More about those numbers later.
In the meantime, Opera users will need to be satisfied with what is, without a doubt, a better Opera browser. The first Opera 10 Beta is now officially released, and right away, testers and Opera fans will notice a big difference: a new default skin, developed by new Senior Designer Jon Hicks.

The new look lacks the distinctive glassy edginess that characterized Opera 9.5 and later editions, replacing it with a cooler, softer shade of grey that, while less original, may be easier for users to discern…maybe. The emblems on some buttons have changed, though their meanings are the same: For instance, the wrench-and-screwdriver icon from 9.5 that brought up the Panels bar along the left side (one of Opera's better contributions) is replaced with an icon that looks like a panel opening to the right. And the trash can icon that represented closed tabs that the user may restore, is replaced with a recycle-like arrow that rotates counter-clockwise, although the "Empty Trash" command is still available by that name from that icon.

Tabs in the new default skin are rounded, and arguably look more like tabs. The big surprise -- and certainly Opera's latest submission to the "Now, Why Didn't We Think of That?" department -- is the vertically resizable tab bar. Dragging the grabber down reveals thumbnails of the latest snapshots of the visible open tabs.

This is one of those "Aha!" features that could draw new users to Opera, at least until Firefox or another browser appropriates it. You don't have to reveal the entire thumbnail, so you don't have to consume too much space. Granted, as I've said before in our reviews of Mozilla's mobile browser experiment Fennec, thumbnails aren't always representative of their content. But they do represent multiple open pages more effectively than just their "favicon" icons (which disappear when you drag the tab bar down).

Now, such a feature will probably preclude any type of add-on that enables enabling tabs to appear in multiple rows. But that might be a fair tradeoff, and in the same vein as Microsoft's changes to the taskbar in Windows 7, Opera's new tab bar could start a fashion trend. 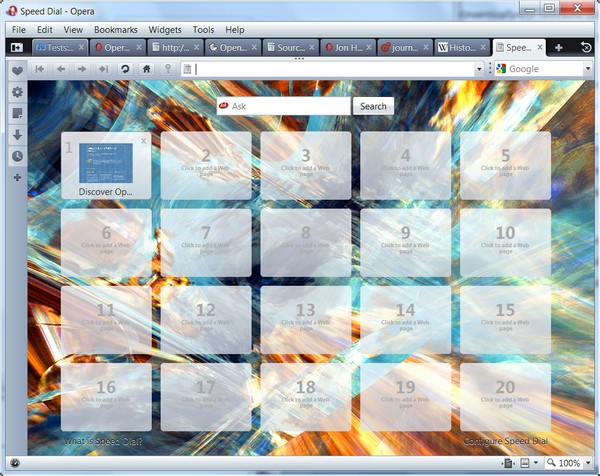 All of a sudden, Firefox is actually behind the ball with respect to an issue it was supposed to have owned: the contents of a newly created tab. While Firefox 3.5 Beta 4 introduces the public for the first time to "favorites" concepts Mozilla Labs began experimenting with last year, Opera is adding some intriguing new features to the Speed Dial feature it introduced in version 9.5. Now you can alter the size of the Speed Dial grid to as much as 5 x 5, and pull up a custom background from your hard drive.