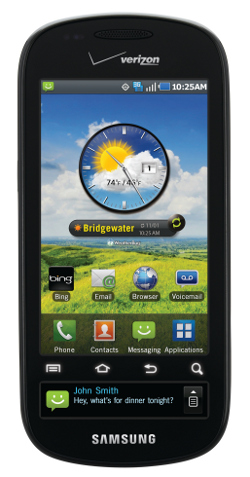 Samsung today announced a new Galaxy S smartphone called the Continuum, which adds a secondary "ticker" screen beneath the main one, that can be activated simply by gripping the phone.

Not unlike Barnes & Noble's first generation Nook e-reader, there's a 1.8" almost-always-on touch panel mounted beneath the Continuum's 3.7" Super AMOLED screen. The ticker screen can be used to show RSS updates, incoming and missed messages, be used to launch widgets, or control calling and media player functions while the main screen is turned off.

While this may seem like a pointless frill, it's actually quite useful, and carries deeper implications for Samsung.

Firstly, using the ticker screen for essential information like messaging and feeds, you don't have to activate the larger screen, and less battery power is consumed. The same goes for occasions when the media player or call controls are minimized to the ticker window, it actually improves the usability of these functions.

But aside from improving usability, this second screen represents something deeper. It means Samsung has a live Android 2.1 branch that supports multiple touchscreens*. Among other things, this could be used to build an Android smartphone in new form factors, like clamshell, which doesn't exist in the Android world yet.

Certainly, Samsung's Galaxy S line of mobile devices casts a broad shadow over the increasingly crowded Android business, with its Super AMOLED-equipped 1GHz devices on the top five wireless carriers in the United States, and the 7" Galaxy Tab available with carrier subsidies, or as a no-contract, Wi-Fi only device.

While unique Android smartphone form factors have been coming almost exclusively from Motorola, it's good to see Samsung whipping out an Android phone that differs from the standard touchphone shape.