Lost a Windows Registry key? Yaru can recover it 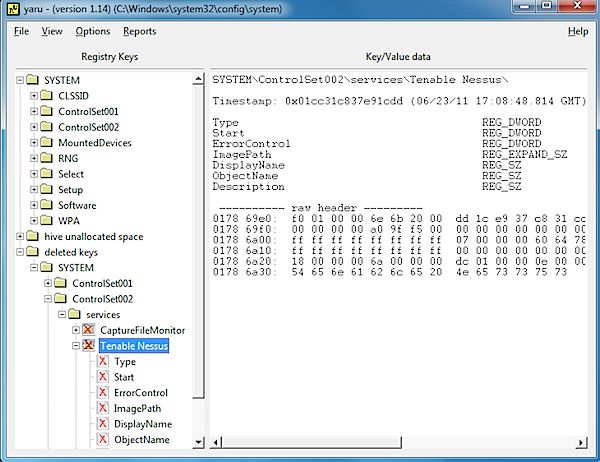 It's no secret that working in the Registry can be dangerous, and the standard Microsoft advice has always been to back up your Registry before you begin. If you're confident in your PC abilities, though, it's tempting not to bother, especially once you realize that most simple editing tasks are entirely safe.

If you don't make a backup, though, the day may come when you really do delete or change something important. And then there's no easy way to reverse the damage; even using a previous system restore point might cause problems with your installed applications.

There may a simpler alternative, though, if you've previously downloaded a copy of the free, portable yaru (Yet Another Registry Utility). This compact program can scan any Registry hive for deleted keys, and in a click or two will export them in a Regedit-friendly format, making it easy to restore them to your system.

To try this out, we browsed to HKEY_LOCAL_MACHINE\System\Software on a test PC, and deleted a leftover Comodo key.

Next, we launched yaru. Unlike Regedit, the program doesn't display the entire Registry immediately; instead you must open the section (or "hive") you need, which in this case meant clicking File > Open System. And after pausing for just a second or two, yaru displayed a familiar Registry tree for the System hive, along with a "deleted keys" branch, where our settings were all clearly still visible.

If you simply want to replace one or two keys or values then this may be enough. Yaru will show you the name of the key in the left-hand pane, and the type -- DWORD, SZ (or string), whatever it might be -- on the right. You can then open REGEDIT and use this information to restore your lost settings.

If you've somehow managed to trash a great deal of data, though, yaru can also export these to a backup file for you. Just right-click the top level key that you need to restore, and choose your preferred export option ("Export keys to file [recursive]", probably, as that saves the selected key and everything beneath it to a single file).

Give the export file a .REG extension, and double-clicking this should fire up Regedit and ask if you'd like to import it (if not, launch Regedit, click File > Import and choose the file manually). Say yes, and that's it, your deleted Registry keys will be restored.

This process is a little safer than most Registry operations, as you're only working with deleted keys, but it's still important to be careful. If you restore the wrong keys, and they exist with some new settings, then you'll update them all at once, perhaps with disastrous results. Make sure you have a system backup or recent restore point available before you begin.

And we wouldn't assume yaru offers too much of a safety net, either. If you launch the program immediately after deleting some vital Registry key then there's a good chance it'll be recoverable, but otherwise we've found that the information can be overwritten at speed, perhaps within hours. You need to react quickly to any Registry disaster to optimize your chances of success.

Still, as yaru is tiny (1.4 MB), portable and free, there's no harm in keeping it around, "just in case". Not least because it does a lot more than simply recovering deleted keys. Windows experts will also appreciate its powerful search tools, and the ability to compare snapshots of a specific Registry hive, while detailed reports provide in-depth information on every aspect of your target system.