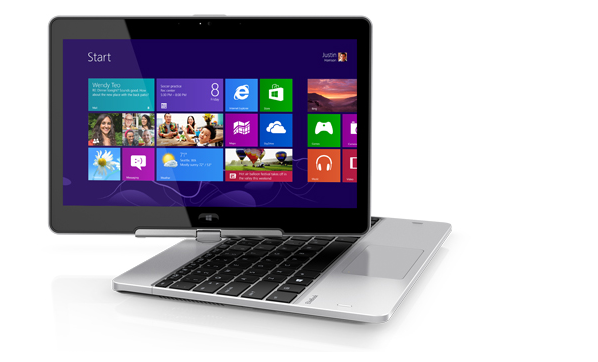 HP revealed the pricing for its initial Windows 8 line-up in late October, and today the company introduces another model designed to run Microsoft's latest consumer operating system. The EliteBook Revolve is described as a convertible tablet/touch-enabled notebook, aimed at business and government use, and with support for legacy applications.

The company is evasive when it comes to detailed specifications, though, giving very little away. Not overly surprising considering the same thing happened with the ElitePad 900. However, HP does say that the EliteBook Revolve comes with an 11.6-inch HD display protected by Corning Gorilla Glass 2 (with the resolution likely to be in the 1366 x 768 territory). Processing power comes from third generation Intel Core processors, suggesting Core i3 to Core i7 CPUs. Solid state drive options, coupled with Intel Rapid Start Technology, are available in a choice of sizes up to 256GB. There’s also a 720p HD camera onboard; WWAN (Wireless Wide Area Network); USB 3.0; DisplayPort and NFC (Near Field Communication).

As usual HP bundles its own suite of applications, including Client Security with BIOS Protection, and Microsoft Defender or Security Essentials, among others. There’s also ePrint software which can remotely print on any capable HP device.

Even though the EliteBook Revolve is touted as a device "optimized for Windows 8", the tablet can also run Windows 7 Pro -- a somewhat unusual option seeing as most high-end manufacturers are committing themselves to taking the Windows 8-only route with hybrid applications. HP clearly wants to appeal to a broader market by offering demanding business users a less controversial option.

The EliteBook Revolve will be available in the United States in March 2013, with pricing to be announced at a later date.