Opera browser takes a radical left turn with Opera Next 15 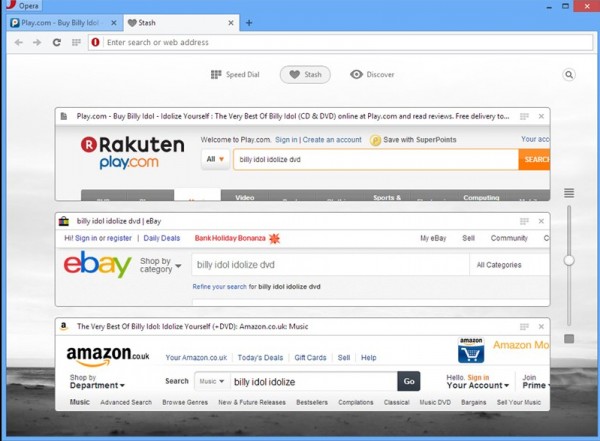 Opera Software has unveiled Opera Next 15, the first look at a major new direction for its cross-platform web browser. Opera Next 15 -- which installs alongside the existing stable version, Opera 12.15 -- sees the browser jump not one, but three version numbers, such is the radical nature of the new release.

The major news surrounding Opera Next 15 is the switch from its own Presto proprietary web rendering engine to Google’s open-source Chromium engine. But other changes include a revamped user interface, overhauled Speed Dial page, new Discover and Stash features, plus the dropping of all integrated email features, which will be available as a separate product, Opera Mail, also available in pre-release form.

Fire up Opera Next for the first time, and it’s apparent that major changes are afoot. The user interface has been rebuilt from the ground up, designed to integrate more deeply with the OS it’s running and provides a more modern, sleek look compared to previous Opera builds.

Another visible change is the implementation of a unified address and search bar, echoing that found in Chrome and Safari as opposed to the separate bars still used by Firefox.

The Speed Dial page has also been improved, with users now able to file shortcuts into folders (simply drag one on top of another to create a folder). A new search field also provides users with a quick and easy way to filter Speed Dial entries. The move could be interpreted as signaling the possible integration of Speed Dial shortcuts and bookmarks into a single entity.

Two new features added to Opera Next 15 are Discover and Stash. Discover provides users with a place where they can set localization and other preferences in order to be fed relevant content -- including news -- from a single place. Meanwhile, Stash is designed to make comparing websites easier by allowing users to press a heart button in order to collect together a group of related sites for comparing. Users scan quickly scan the Stash via a resizable page preview, or search all sites within the Stash using keywords.

At the present time, a number of features are missing from this version -- including the Opera Link bookmarks/Speed Dial sync tool, bookmarks themselves and the Opera Sidebar -- an acknowledgement that porting features across to the new build is an ongoing process. The Opera Next changelog states "As Opera has recreated its desktop browser, the Next builds will introduce features selectively and iteratively". 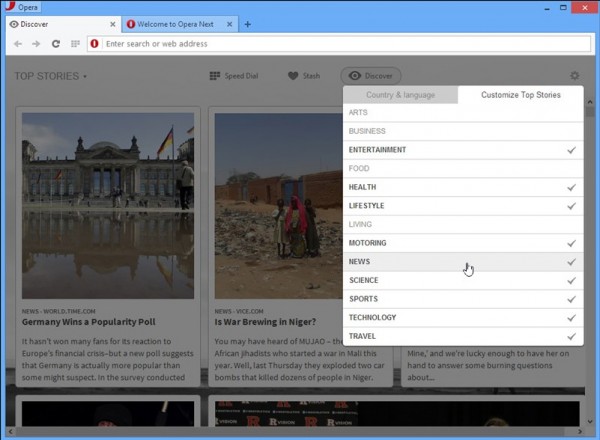 Opera’s "engine swap" was announced in February when the company announced it would be dropping support and development of its own Presto engine in favor of Google’s open-source Chromium engine. In April Google announced it was forking development on this engine -- more commonly known as WebKit -- in favor of building a new engine called Blink. Opera previously confirmed it would be following Google down the Blink path, and it’s the Blink engine that’s been implemented in this release.

Aside from providing a "standards-compliant and high-performance" browser, the switch also sees Opera revamp its Opera Turbo mode for loading web pages quickly over slow connections. Retitled, "Opera Off-Road", the feature gains support for the SPDY protocol and promises even faster loading of webpages over slow networks.

The move was made to free up resources to allow Opera to develop more new features and build new products. It’s already made good on both of these promises with the radical revamp of Opera Next here, plus the launch of Opera Mail as a standalone product.

Opera Mail basically mirrors the functionality found in the integrated tool from previous versions of Opera, but adds new labeling, filtering, threads and multiple tab support to go with the promise of a fast, sleek "lightweight" mail client.

Both features are still very much in preview mode, but experienced users impatient to see what’s coming in Opera’s future can download both now. Opera Next 15.00 and Opera Mail 1.0.1033 are both available as freeware downloads for Windows and Mac. Linux versions are in development, but not yet available.