Steam Controller -- a potential PlayStation 4 and Xbox One competitor 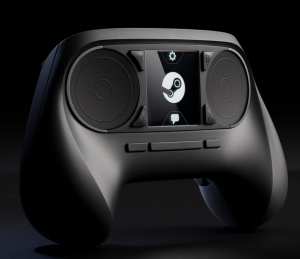 The video game controller has evolved over the years. However, from the iconic NES and going all the way to the soon-to-be-released PlayStation 4 and Xbox One, they are basically the same; directional pad on the left and buttons on the right. Sure, the number of buttons has increased, and there are now analog thumb-sticks, but overall, the concept hasn't changed -- until now.

Today, Valve announces that it is revolutionizing the game controller with its innovative Steam Controller. This controller is designed to accompany its new Steam Machine hardware and SteamOS Linux distro. Clearly, the company has its sights set not only on your living room, but competing with Sony and Microsoft. Yes, the company is using Linux and a custom-designed controller to compete with PlayStation 4 and Xbox One.

The innovation is apparent just by looking at the controller. The company says, "the most prominent elements of the Steam controller are its two circular trackpads. Driven by the player’s thumbs, each one has a high-resolution trackpad as its base. It is also clickable, allowing the entire surface to act as a button. The trackpads allow far higher fidelity input than has previously been possible with traditional handheld controllers. Steam gamers, who are used to the input associated with PCs, will appreciate that the Steam Controller’s resolution approaches that of a desktop mouse".

These dual circular trackpads represent total out-of-the-box thinking and a truly different approach to game control. However, the question is, how will it work with games that are designed for a keyboard and mouse?

"The Steam Controller is designed to work with all the games on Steam: past, present, and future. Even the older titles in the catalog and the ones which were not built with controller support. (We've fooled those older games into thinking they’re being played with a keyboard and mouse, but we've designed a gamepad that’s nothing like either one of those devices.)", says Valve.

You've read that right. Not only will it work with controller-enabled Steam games, it will also work with keyboard and mouse-designed games. This enables maximum-compatibility and opens new ways to interact with older games.

"In the center of the controller is another touch-enabled surface, this one backed by a high-resolution screen. This surface, too, is critical to achieving the controller’s primary goal - supporting all games in the Steam catalog. The screen allows an infinite number of discrete actions to be made available to the player, without requiring an infinite number of physical buttons". It will be interesting to see how the company leverages this clickable surface.

Moving on from revolution to evolution, Valve has improved upon the rumble, or vibration, feature found in many modern controllers. Typically, vibration is delivered by small motors that spin a weight. This new controller takes that to a new level.

The company says, "the Steam Controller is built around a new generation of super-precise haptic feedback, employing dual linear resonant actuators. These small, strong, weighted electro-magnets are attached to each of the dual trackpads. They are capable of delivering a wide range of force and vibration, allowing precise control over frequency, amplitude, and direction of movement".

Overall, the beauty of this controller immediately draws me in. Attractiveness aside, it also appears extremely ergonomic and I cannot wait to wrap my hands around it. Valve is taking its living-room gaming approach very seriously and I for one cannot wait to try the finished product. While I won't be cancelling my PS4 pre-order over it, I will closely monitor the situation while trying to contain my excitement.