See you on the golf course, John, Cisco is in trouble 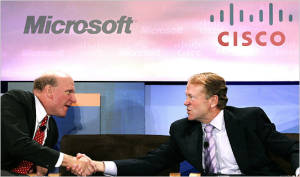 Last week I began this series on large companies in turmoil by looking at Intel, which I saw trying to guarantee its future through enlightened acquisitions that actually emulated this week’s company -- Cisco Systems.

So if Cisco already knows how to assimilate other companies and technologies to stay ahead of the market, how can it have a problem? Cisco’s problem is its market is mature and being commoditized with all boats sinking. And this time there isn’t an obvious new idea to buy.

Cisco is becoming a very expensive utility appliance. The revenues streams at Cisco that are at risk:

Cisco is old and tired according to a friend who worked there. "When I was at Cisco during 2000," he said, "anyone with more than four years of service was an odd duck, you cashed out with your options after four years. Today I still see the same people from 2000 and wonder, 'What are you doing?' Everything is static and big corporate, the juice went out the door in 2000".

The core problem for Cisco is customers are beginning to ask why they should pay $550 per month for a T1 with a $3,000 router when you can have DOCSIS 3.1 at $99 and a $300 router with VPN tunneling to create the private VPN WAN network?

For that matter, why buy complex very large and expensive switches from Cisco when Wi-Fi at 1.3Gbps is available?

Why pay $1,000 for a Cisco VoIP phone at your desk? Who is calling you at your desk anymore?

Flip cameras were a bust: the profit margins were too low. Ditto for Linksys. Cisco isn’t selling many of those $300K telepresence rooms, either -- another market being gobbled from beneath.

The Cisco IP everything vision has run out of steam, as has much of Cisco’s technology. To look under the hood, the Cisco Next Generation routers still use a single threaded OS to support all functions even with a dual core on the router. The same is true with the edge and enterprise switches.

Very old operating system technology is still running the Cisco IP world. Cisco has just started to move into Linux, (Nexus) as the OS and just starting to become stable after five years.

This does not mean Cisco is doomed. With $48 billion in cash they can buy a new future or two. It’s just that their old markets are fading fast and new markets of big enough size just aren’t emerging.