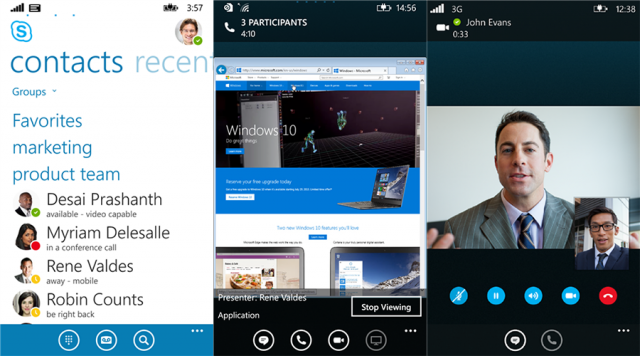 Skype for Business is Microsoft's new enterprise communication tool, serving as a replacement for Lync in the software giant's business-oriented lineup. It was officially released in April, with new features and improvements coming from its predecessor, but is only now available on Windows Phone.

Compared to Lync 2013, it sports a different branding -- Skype for Business, obviously -- and user interface, the latter of which closely mimics the consumer Skype client we are already familiar with. But these are not the only changes worth mentioning.

There are also revamped notifications in tow, with Microsoft now offering over 100 of them, improved conversation notifications, which should be consistently delivered to the device the user is active on, beefed-up security, with Skype for Business now toting at-rest data encryption, and the synchronization of most-recent conversations, which should make it easier to pick up conversations when switching between multiple devices.

However, those who are still rocking Windows Phone 8 -- for whatever reason -- will not be upgraded to Skype for Business. Instead, they will have to keep using Lync 2013 or Lync 2010 until they upgrade their devices to a newer version of the tiled operating system.

Skype for Business is available to download from Windows Phone Store.