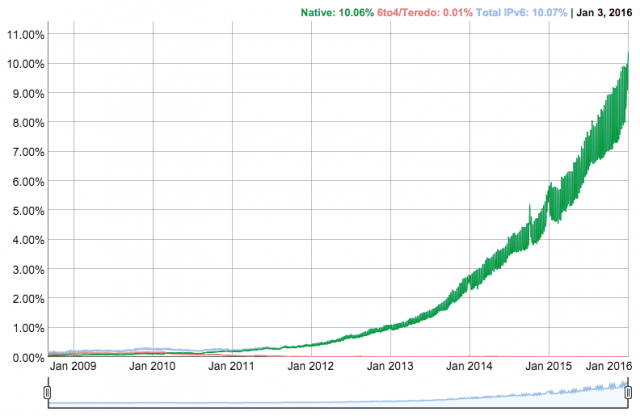 New data released by Google has shown that the uptake of IPv6 -- the most recent version of the internet communications protocol -- has grown considerably in the last 12 months.

Google revealed that 10.09 percent of all traffic to its websites was made of IPv6 connections as of January 2 2016, nearly double that from the same time last year when the number was 5.47 percent.

In terms of the number of IPv6 connections made per country, Belgium is currently leading the way with 44.32 percent, followed by Switzerland with 30.89 percent and the US with 25.63 percent.

As things stand the UK is a long way behind, with IPv6 connections to Google sites taking place just 2.95 percent of the time. That’s pretty disappointing seeing as the UK is supposed to be one of the great pioneering countries in technology, but this figure will no doubt improve as the need to switch becomes more pressing in 2016.

Last year the American Registry of Internet Numbers (ARIN) urged companies to consider IPv6, saying: "ARIN encourages customers to seriously undertake a review of what they will need to make the switch to IPv6", the organization said. "The internet is evolving and, as it changes and expands into new territories like the IoT, IPv6 will play a critical role".

15 Responses to IPv6 adoption nearly doubles in a year