Microsoft Surface Book: Not the ultimate laptop, but close [Review] 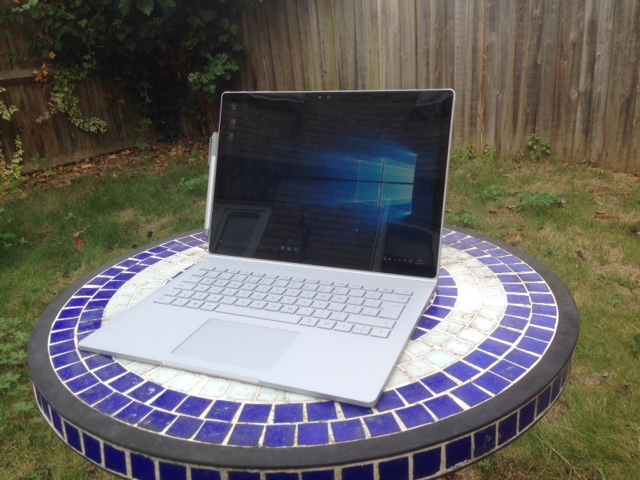 The developing digital landscape has changed the way people interact with hardware. We are now more device-agnostic than ever -- both in our personal and professional lives -- meaning we are often carrying around two, sometimes three, devices to complete different tasks.

The 2-in-1 (or hybrid) market has looked to address this by merging the power and performance of a laptop with the flexibility and mobility of a tablet. For the most part, Microsoft has led the way in this area with its Surface and Surface Pro devices, but is now being pushed hard by the likes of Apple and Huawei.

So, Microsoft's next move has been to mix things up a bit. Rather than sticking with the model of a tablet that doubles up as a laptop, it has released the Surface Book, a device which is primarily a laptop but with a detachable screen that can also be used as a tablet.

After playing with the new Surface Book for the last few weeks, it's clear that Microsoft has an impressive device on its hands. Let's take a closer look.

Call me shallow, but I'm going to start with the looks, mainly because the Surface Book is a mighty fine-looking piece of hardware. Its sleek design incorporates precise edges and curves that give it a very professional look and feel, with a somewhat minimalist approach working well in its favor.

The base itself is one flat piece of metal, with sharp, defined edges, rounded corners and everything placed in perfect symmetry. It measures 312mm by 232mm with a thickness of 7.7mm, making it slightly larger than the Surface Pro 4. In terms of weight, the full Surface Book comes in at just over 1.5kg, meaning it light enough to carry around comfortably during the day. The tablet alone weighs 0.7kg, making it slightly lighter than the Pro 4, although heavier than the majority of other tablets on the market.

The keyboard, simply put, is a joy to type on. The typing experience is vastly improved compared to the Type Cover that comes with the Pro 4, with the backlit keys feeling firm and responsive.

The screen -- a.k.a the tablet -- is a 13.5-inch PixelSense display with a 3,000 x 2,000 pixel resolution (267 ppi), providing crystal clear images and sharp color contrast. It attaches to the base through several clips described as "muscle wire locks", which have a very clever function.

But the most interesting part is undoubtedly the hinge; a unique, innovative design that really makes the Surface Book stand out in an ever-growing crowd. Described by Microsoft as a "dynamic fulcrum hinge", it basically rolls inwards and outwards as you open and close the screen, effectively lengthening the base to improve the balance of the Surface Book when the screen is up. It really is impressively and seamlessly designed, so much so that if you didn't know the screen could detach you'd assume that the whole device is one solid piece of metal.

I do have a couple of minor gripes with the design. Firstly, the back is prone to picking up dirty marks and scuffs, especially if you're transporting it around all day, and the Windows logo on the back of the tablet picks up fingerprint marks pretty easily. It also kind of bugs me that the trackpad is just one solid area without any visible buttons. I've got used to having actual buttons to press so it took a bit of time getting used to not having any.

Both of these are minor issues that take nothing away from the overall beauty of the Surface Book. It's definitely one of the best-looking devices on the market, with that hinge providing the added x-factor.

Clearly, one of the primary selling points of the Surface Book is its versatility, a vital component of all modern portable devices. In fact, Microsoft describes it as having an "ultimate" level of versatility, with the ability to transform into three configurations: laptop, tablet and a "creative canvas" where the screen is turned around and attached to the keyboard.

These variations serve to cover as many business needs as possible, from carrying out personal tasks such as sending emails to facilitating collaboration during group meetings. And one of the great things about the Surface Book is how easy it is to switch between the three. The screen detaches from the keyboard at the touch of a button -- one located on the keyboard and another on the screen itself -- which means there's no danger of it falling off accidentally. It can then be used as a fully-functional tablet and reattached to the keyboard by just being clicked back into place.

There is however one rather significant flaw with this system. As the unlocking mechanism is software-controlled, the tablet can't be detached without power. So if you're out on the road and your battery dies, I'm afraid you'll be stuck with just the laptop.

Performance-wise, the Surface Book doesn't disappoint. Start-up and shut down are both super fast and I've never had any problems in terms of latency or the device slowing down in either laptop of tablet form. Everything stays quick and smooth even with lots of tabs and multiple programs open, ideal for quickly switching between different tasks.

On the right hand side of the screen an "Action Center" can be dragged open by using your finger, showing notifications and access to a range of options including settings, battery options and internet access. This is primarily for use with the tablet but can be used in laptop form as well.

Battery life easily lasts a full day, especially if you fiddle with the screen brightness and use the battery saver mode. As I write this, its nearly 5.30pm and I've still got 42 percent battery remaining, having been using the device on and off without a charger since 9am. So you're probably looking at around 11 - 12 hours of battery life depending on how hard you make the Surface Book work.

As you would expect, it's it's not quite the same story when the tablet is detached. A tablet could never last as long as a laptop and around four hours of battery life is probably about par. It does charge pretty quickly, with a full charge only taking a couple of hours, so that's another point in its favor. 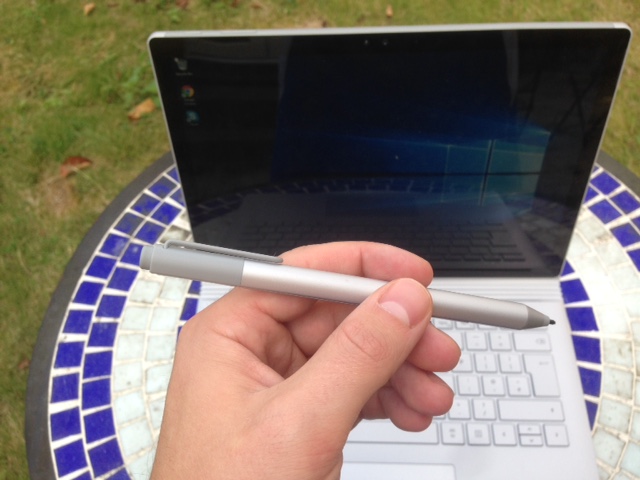 Now on to the pen, which comes included with the Surface Book and magnetically attaches to the left edge of the screen. Microsoft says that it offers "the ultimate modern writing experience", with reduced latency and 1,024 levels of pressure. I'm not sure I'd go so far as to describe it as "ultimate", but it is nice to use, feels quite sturdy compared to a lot of other stylus' and actually looks like a real pen.

A cursor appears when the pen is a few millimeters from the screen so you know exactly where you're aiming and the inclusion of palm-detection software means that the display ignore's everything else -- such as a stray fingers -- when the stylus is near and focuses only on the pen's inputs.

The Microsoft Edge browser allows you to write notes and doodles directly onto webpages, which can then be saved and shared directly with clients or colleagues. You can doodle and annotate images in a range of colors and styles, highlight pieces of text -- all of which can be easily erased -- or type a note by adding in a text box.

But the best part about the pen has to be the range of shortcut features available. There are three options: A single press of the button on the top launches OneNote, a double press takes a screenshot and holding the button down opens Cortana. These can all be customized so you can get the right mix to suit your needs.

There's no denying that the pen is lovely to use and has some great functionality, but I'm not sure how much it would be used by the average user. The pen didn't really feature too highly in my general use of the Surface Book, but for a designer or engineer it would be a valuable addition.

The Surface Book hits the nail on the head in so many areas. Design, flexibility and ease of use are all impressive, but there's just one drawback -- the price.

You see, unfortunately, the Surface Book doesn't come cheap, raising the question as to whether it is actually worth the price. There are six variations available in US and five in UK , laid out as follows:

All variations aside from the first two options come with an Nvidia GeForce graphics GPU in US (in UK, that applies to all but the least expensive one that you can buy) for an added power boost, which goes some way to explaining the price, but definitely puts the Surface Book at the top end of the price spectrum.

CPU: 6th Generation Intel® Core i5 or i7 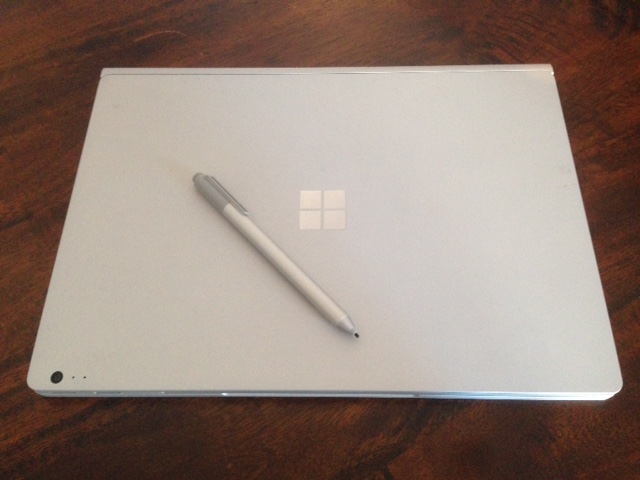 As you can probably tell, I think very highly of the Surface Book. Aside from a few little niggles, it's a quality piece of kit. The display is crisp and clear, the keyboard is great to use and the design is as sexy as it is innovative. When you add in the futuristic-looking hinge, the quality of the Pen and the performance of both the laptop and the tablet, you've got a device to give all others a run for their money.

As previously explained, the only potential sticking point could be the price, as the Surface Book doesn't exactly come cheap. The five variations available -- ranging from $1,499/£1,299.00 to an eye-watering $3,199/£2,649.00 -- are definitely at the high-end of the market's price range, meaning the more affordable options on the market could win out in the long run

So, the Surface Book isn't quite the ultimate laptop, but it's pretty darn close. Just make sure you start saving those pennies.

81 Responses to Microsoft Surface Book: Not the ultimate laptop, but close [Review]