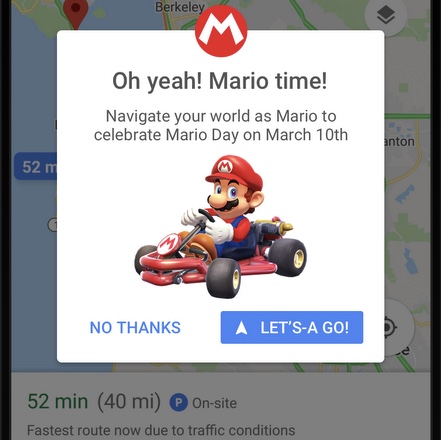 My first-ever console was Atari 2600. My favorite game for it was Mario Bros. -- it was before the brothers became super on Nintendo Entertainment System. It was Super Mario Brothers on NES that made me -- and countless others -- huge video game fans, however. My love for Mario, Luigi, and the rest of the Nintendo world, remains strong to this day.

To celebrate Mario, an annual holiday has been established -- MAR10 Day. Get it? It is on March 10, as the abbreviation looks like the word "Mario." Well, Google is apparently getting in on the Mario love, as it is bringing the plumber to its Maps service for a limited time.

"To get started, you’ll need to first update your app from Google Play or the App Store. Next, simply click on the yellow '?' icon found on the bottom right of your Google Maps app on Android or iOS. You’ll then see a prompt to enable Mario Time," says Google.

The search giant also says, "Once enabled, you’ll see that the navigation arrow has morphed into -- who else? -- Mario. He’ll be a constant companion wherever you’re driving this week -- to work, to school, or the spaghetti house. Just remember to practice safe driving on the road -- we don’t encourage throwing bananas or red shells at other drivers in real life!" 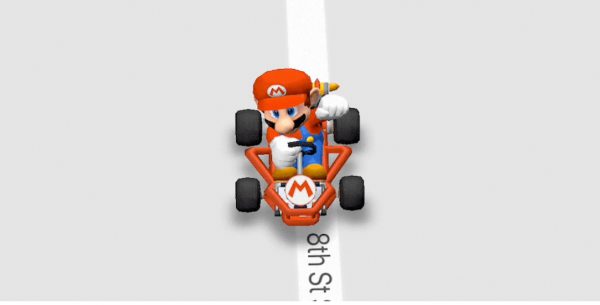 If you aren’t sure how Mario ties into Google Maps, remember, his name is a part of the greatest racing franchise of all time -- Mario Kart. As you can see above, Mario will be in his famous go-kart.

Ready to give Mario on Google Maps a try? Well, you can do so immediately. The fun doesn’t end on March 10, however, as the plumber will be available on the service for one week.