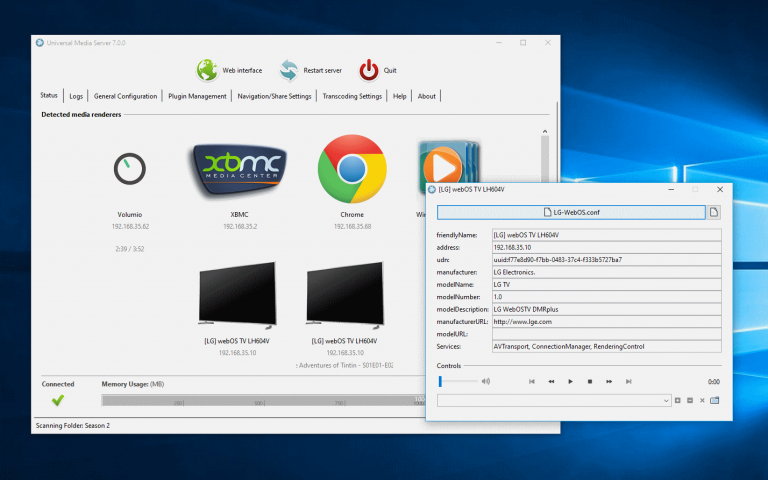 The server, which works with a wide range of UPNP/DLNA-compatible devices from mobiles to smart TVs, adds support for filtering content into movie and TV show libraries. It also promises massively improved folder-scanning times along with quicker browsing of Media Folders.

The app, which is Java-based, opens with new folder options for its parent media library folder: TV Shows, Movies, 3D Movies and Unsorted. The navigation pane gains a right-click menu, allowing folders to be fully marked as played or unplayed.

The Cache folder has now been renamed Media Library and is enabled by default. All Hide options have been reversed, so now users select 'Show…' instead -- for example, 'Show Media Library folder'.

UMS is also now capable of detecting added, changed and removed files from shared folders, which are now automatically checked for changes on startup (users can disable this feature…)

Folder scanning has been substantially improved, with the promise of scan speeds up to 10x that of the previous version. Browsing the Media Library is now also quicker.

One final change is that the tracking feature for fully played content is now stored in the SQL database.

Samsung 8 Series TVs have been added to the list of supported renderers, while the FetchTV config has been updated and support for Galaxy S7 tablets has also been improved.

The new version also fixes several bugs, including the sorting in dynamic folders. Also, content from the Media Library should now be removed along with any parent folders when they’re deleted from UMS.

Univeral Media Server 7.0.0 is available now as a free, open-source download for Windows, Mac and Linux. The Java Runtime Environment is also required.