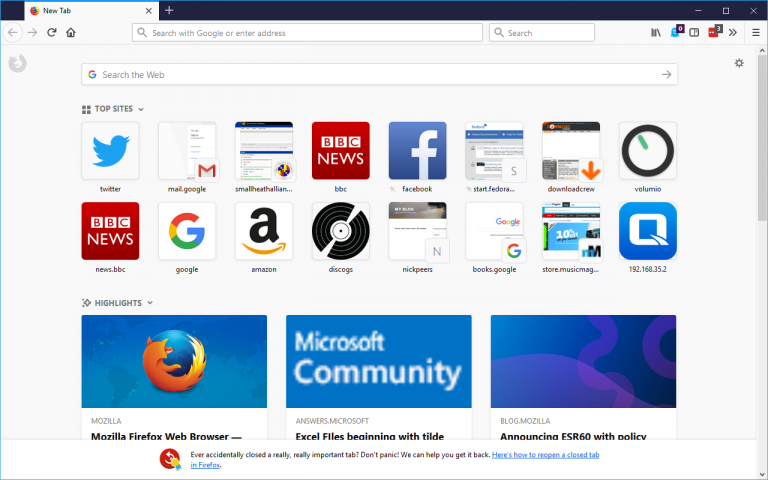 Mozilla has released Firefox Quantum 60.0 for desktop, along with Firefox for Android 60.0 and Firefox ESR 60.0.

The Firefox Home page that appears with new tabs has been tweaked, with a new responsive layout that displays more content on wider displays. Additional options have also been added for managing content and sections on the page.

Elsewhere, the Highlights section now includes content saved to Pocket, although on the downside sponsored Pocket content may now appear for a percentage of US users. Android users also gain a new 'View Page Source' option to the Page Action menu.

The Preferences section sees a further redesign, this time focusing on the renamed 'Cookies and Site Data' section under Privacy & Security. It’s been revamped for clarity and simplicity for controlling first- and third-party cookies.

Firefox 60 improves its camera privacy indicators, making sure to switch off both the camera and its light when video recording has been disabled (and vice versa).

Other changes include the application of Quantum CSS to render the browser UI, with the promise of faster performance. Linux users are also promised improved WebRTC audio performance and playback.

Support for the Web Authentication API has also been added, allowing users to authenticate websites using USB tokens from the likes of YubiKey.

One significant change is that Windows users must now press F9 to toggle Reader View on and off. Also, TLS certificates issued by Symantec before June 1, 2016 are no longer trusted.

The release also sees Firefox ESR updated to version 60 -- it’s the first major ESR release since version 52 in March 2017, and includes the many new features and tweaks added since then. Aside from the switch to the faster Firefox Quantum engine, organizations should be aware that add-ons not developed using the WebExtensions API will no longer be supported.

Firefox Quantum 60.0 and Firefox ESR 60.0 are both available now as a free, open-source download for supported versions of Windows, Mac and Linux -- note the ESR version will not receive any feature updates from now until the next major ESR release and is aimed primarily at larger organizations (see here for details). Also available is Firefox for Android 60.0.