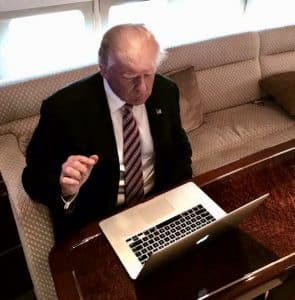 TikTok, maybe, but WeChat? Impossible. Everything Donald Trump understands about the Internet could fit in a thimble. He’s a reckless leader who isn’t bothered by things like, well, facts, so it shouldn’t be surprising that he expects to command WeChat into oblivion. But what will happen to his already limited Internet authority when that doesn’t work?

Trump has a chance of taking down TikTok, the short form video sharing site, because that service is dependent on advertising. He can force the app out of U.S. app stores (though not out of foreign ones) and he can cut off the flow of ad dollars… at least those dollars that flow through American pockets. But there are workarounds, I’m sure, even for TikTok and 45 days is a lot of time to come up with them. So maybe the service will be sold to Microsoft or maybe not. In either case I’m sure TikTok will survive in some form.

WeChat, on the other hand, will thrive.

WeChat, if you haven’t used it, is the mobile operating system for China. It’s an app platform in its own right that is used for communication, entertainment, and commerce. Imagine Facebook, LinkedIn, PayPal, Venmo, Skype, Uber, Gmail and eBay all in a single application. That’s WeChat. It’s even a third-party application platform, so while US banks operate on the Internet, Chinese banks operate on WeChat. Shutting WeChat down in the U.S. would be a huge blow to WeChat’s parent company, TenCent, and a huge blow to the Chinese diaspora. Except it won’t work.

To defeat President Trump, all WeChat users need is a Virtual Private Network and any WeChat users already in the U.S. already have a VPN to defeat the much more formidable Great Firewall of China. Whatever Trump thinks he can do is puny in comparison.

Back in 1998 I gave a speech to the North American Association of State and Provincial Lotteries at their annual meeting, held that year in Minneapolis. They gave me a hand-carved wooden duck decoy that’s on my bookshelf today. My topic back then was this thing called the Internet and what it would mean to state lotteries and legalized gambling in general. I told them it would rock their world. And it has.

What amazed me in 1998 was that the lottery folks weren’t Las Vegas-type gambling executives but more like the people down at the DMV -- pleasant and chubby civil servants there to collect the money, thanks. They were secure in their local gambling monopolies and had no idea that some outfit in the Channel Islands could steal their customers with a game of online poker.

The state troopers would handle that problem, they thought, dimly. I could not possible be correct about Internet gambling.

I suggested fighting fire with fire -- that the states promote their lotteries internationally, expanding their territories and making even more money. They looked at me like I had two heads.

Twenty-two years later along comes President Trump, sounding precisely like those NASPL people. He has no idea what he is talking about. And if he thinks he can bully TikTok into selling itself to Microsoft, that will only happen if that’s what TikTok wants to do… and the price is right.

Even then I expect Microsoft will get more (or less) than it is expecting.

129 Responses to President Trump thinks he can shut down WeChat: It won’t work