One of the under-appreciated events at this year's 3GSM World Congress in Barcelona was the demonstration by graphics component manufacturer nVidia of a theoretical user interface programmed using a 3D library evolved from OpenGL. The Khronos Group industry consortium - of which nVidia is a member - used the company's demonstration to highlight the public release of version 1.0 of the OpenKODE specification, which incorporates the OpenGL ES library for embedded systems, along with other open standards specifications for streaming media.

The hope is to get handset manufacturers interested in the notion of a kind of unified interface, incorporating functions that could be enabled on several brands of phones and portable devices regardless of whether they're running on different infrastructures, such as Symbian, Java, or Windows Mobile. AMD, now the parent of ATI, is also a Khronos Group member, as is Intel, along with phone producers Nokia, Motorola, and Apple, and portable game console maker Sony. Microsoft is not a member.

Over the last few years, it's been Sony's involvement in Khronos that has developed the most interest, especially with its folding of its cross-platform Collada project into the effort in August 2005. Collada was a Sony project that experimented with the notion of game designers for PlayStation 3 - which uses OpenGL as its graphics library - being able to easily transport their programs' assets to a smaller platform. PlayStation Portable cannot be that platform, so Collada's merger with a broad alliance of supporters of embedded software tools was an indication that the company might be interested in investing in a PSP successor with broader platform appeal than a simple game box and portable movie player. 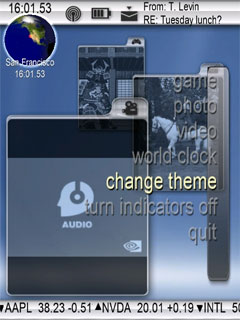 NVidia's demonstration earlier this week at 3GSM could give us the first glimpse into what such a platform might look like on the business end.

Meanwhile, the addition of the OpenMAX IL 1.1 library into OpenKODE is expected to give small platform developers a platform-agnostic way to develop media playing applications that address on-board codecs. This way, for example, multiple models of cell phones could be enabled to run streaming media downloaded through Verizon's next-generation V CAST service, as well as AT&T's new MediaFLO service developed with Qualcomm, without developers having to write code packages for each phone model exclusively.

As Khronos Group President and nVidia Vice President for Embedded Content Neil Trevett told a member of the OpenKODE forum, "OpenKODE is initially firmly focused on the mobile market as it is that market that most urgently needs standardized advanced media acceleration and application source defragmentation."

Curiously, nVidia has said little else about the 3D UI demonstration, other than that it utilized translucent window compositing with transition effects.