ORLANDO - In a very memorable effort to erase executive vice president Bob Muglia's reputation for overstating the "Microsoft Vision," while introducing a much-needed element of self-deprecating humor to the proceedings, the company's senior vice president starred with the legendary Christopher Lloyd in a "Back to the Future" video where he was given an opportunity to go back in time two years and undo the mistakes of his prior keynotes.

As our video begins, it is 2005. Bob Muglia exits the stage at TechEd 2005, his blue denim shirt drenched with the debris of numerous tomatoes, lettuce, and other valuable organic waste products, after what appears to have been a disastrous reception at the main keynote. Pleading with "Doc" for an explanation, Muglia asks him, what could possibly have gone wrong? "I was just showing them Microsoft's Vision of the Future."

"Some of these guys have had Microsoft's vision up the wazoo," Lloyd responded, in perhaps his best-delivered line since threatening John Larroquette in "Star Trek III" to aim only at the engines. 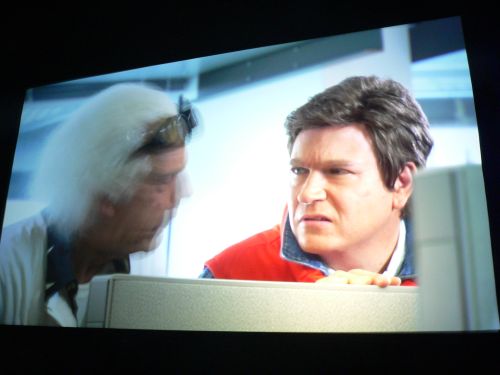 In order to drive home the importance of saving the world from too much Microsoft Vision, Doc sent Muglia into a Microsoft-generated alternate future, circa about 2012, where humanity had been assimilated by what could best be described as "The Wrath of Bob" (not Bob Muglia, the other "Bob") accompanied by his evil sidekick, Clippy. 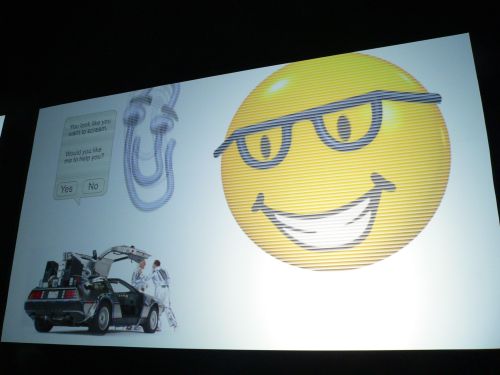 "It looks like you're trying to scream," chirped Clippy as he noticed Muglia emerging from the DeLorean. "Would you like me to help you?" 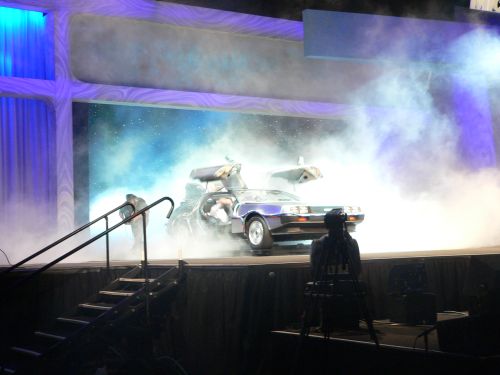 The video preceded Muglia's and Lloyd's entrance on stage in the authentic DeLorean, where Lloyd as "Doc" deputized himself to serve as Muglia's personal "MS-BS Detector," lest he infuse the present timeline with enough MS-BS to disrupt the present timeline. He'd seen the alternate future...and that should have been warning enough. 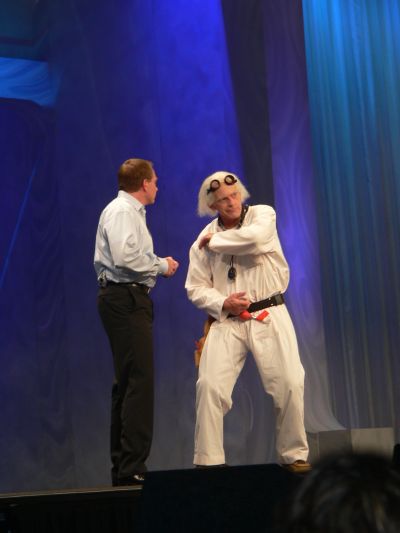 From there, Muglia started outlining something Microsoft is calling its "Dynamic Systems Initiative," though by the 18-minute mark, the definition of this concept (which Muglia refers to as an "optimization model...where software and services can come together to help improve the business of your organization") appears to be a "vision" only with a promise not to use the word "Vision" in explaining it.

Guest speaker Tom Bittman of Gartner then showered the crowd with aphorisms such as "Agility requires us to take technology and apply it to itself." (Talk about a reflexive loop.)

"Doc" had promised to blow a horn whenever there was too much "MS-BS." Many in the press line were thinking perhaps "Doc" took an unscheduled trip back to 1896. Granted, perhaps the horn doesn't apply to Gartner, but there is a packed house full of a few thousand developers, few of whom appear to like to be lectured to...especially to be told what "it's all about," what to focus on, and how to find "a different way of maturing."

But it was indeed a "keynote" speech, and the note the video and Lloyd's welcome appearance sounded was of a corporation that maybe, just maybe, if it hasn't completely "gotten it" just yet, may at least have realized that the time to start trying has already past.

How to bypass 'Windows protected your PC' message in Windows 10