A team of Microsoft spokespeople have been working throughout the day to devise a plausible explanation for a comment made by CEO Steve Ballmer during a company gathering in the UK, which on its face appears to say it is considering litigation against users of Red Hat Linux for patent infringement.

But one spokesperson acknowledged late this afternoon that multiple sources have yet to come to an agreement over what the company should say.

Ballmer's comments came during a Q&A session after a talk on the UK software economy, and the role online services will play in that economy, that took place on Microsoft's British campus. Here is the video from that event. Here also are Ballmer's comments in their entirety:

Advertisement
I think there will be multiple business models for software and services in the future. We happen to believe in what I'll call a commercial model for us, because it's a little hard to rent the office space here unless we have revenue, etc. But that doesn't mean there's one model that inherits the Earth. We're saying as a commercial enterprise, we're engaged in commercial software; there'll be other people who will choose, for whatever set of reasons, and with whatever set of business objectives, to engage in an open source approach.

So what's our strategy? A) To compete. When we have products that have open source competitors, we need to offer better value. Our products have to have more capabilities, they need to be better supported, they need more applications, they need more device support. We have to compete, where there's a direct overlap.

Now, people focus a lot on Windows vs. Linux, or Office vs. OpenOffice. Sure, we're competing. On the other hand, I'd also tell you the following is true: I would love to see all open source innovation happen on top of Windows. So we've done a lot to encourage, for example, the team building, PHP, the team building, many of the other open source components, I'd love to see those kinds of open source innovations proceed very successfully on top of Windows.

The only other thing I would say that is probably germane is, we spend a lot of money, the rest of the commercial industry spends a lot of money on R & D. We've spent a lot of money also licensing patents, when people come to us and say, "Hey, this commercial piece of software violates our patent, our intellectual property, we'll either get a court judgment or we'll pay a big check. And we are going to - I think it is important that the open source products also have an obligation to participate in the same way in the same way in the intellectual property regime. 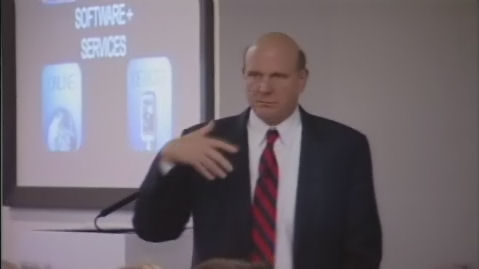 That's why we've done the deal we have with Novell, where not only are we working on technical interoperability between Linux and Windows but we've also made sure that we could provide the appropriate, for the appropriate fee, Novell customers also get essentially the rights to use our patented intellectual property. And I think it's great the way Novell stepped up to kind of say intellectual property matters. People use Red Hat, at least with respect to our intellectual property in a sense have an obligation to eventually to compensate us. [emphasis ours]

There are plenty of other people who may also have intellectual property. And every time an Eolas comes to Microsoft and says, "Pay us," I suspect they also would like to eventually go to the open source world. So getting what I'll call an intellectual property interoperability framework between the two worlds I think is important.