The advertisements will begin to appear later this month in various locations in the gaming environments, including prominent billboards. Those games featuring the ads include: Splinter Cell: Double Agent, Rainbow Six Vegas, Enemy Territory: Quake Wars, and Need for Speed: Carbon.

The agency's specialties are signals intelligence (SIGINT) and Information Assurance. The latter is the task of keeping government communication and information systems secure from hackers and interlopers.

A GCHQ spokesperson told the Times that the advertising campaign will appeal to an audience with hobbies and interests related to IT fields, which are some of the most important areas in the department.

Whether people with an interest in codebreaking and eavesdropping -- or even general technology for that matter -- would be especially interested in a driving game is not yet clear. 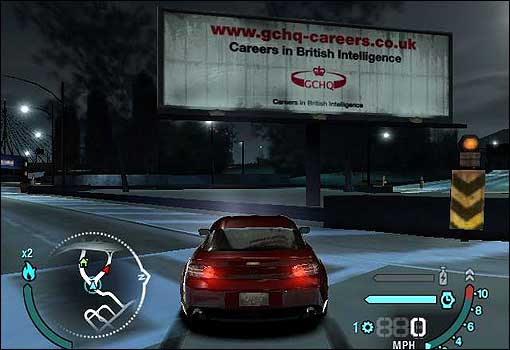 4 Responses to Espionage, Codebreaking, and Gamers