Many signs have long pointed to a 3G iPhone launch next month, and the speculation grew even louder over the weekend as Apple stopped selling the current 8GB and 16GB models from its online store.

The iPhone becoming "Currently Unavailable" from Apple followed UK wireless carrier O2 posting a message saying that it was temporarily no longer offering the device either. However, O2 later put back on sale the 16GB iPhone without further explanation.

Further fueling the rumor mill, AT&T Wireless has begun listing a new device on its account manage Web site called "iPhone Black." Sources have said Apple is planning to make a 3G iPhone with a glossy black backing instead of the silver aluminum the iPhone currently wears.

AT&T recently sent out a memo to its employees, announcing an "exciting Summer Promotional Launch" starting on June 15, and asking them not to take vacations until the furor dies down. The carrier sent a similar memo last year before the initial launch of the iPhone on June 29.

Still, it's all speculation at this point and it's possible that Apple has simply temporarily run out of iPhone inventory. AT&T continues to sell the device, and no official announcements have been made by either company. But the signs are clearly pointing to an upgraded iPhone in the coming months, and 3G network support has been all but confirmed by various wireless operators, manufacturers and analysts. 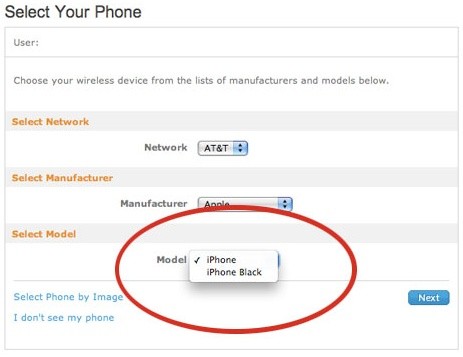