What began as paid Wiki hosting service JotSpot, was bought by Google in 2006 and re-launched a year and a half later as Google Sites. Finally, this service is open to the public, not just subscribers.

Google Sites is an addition to the company's suite of online tools, and as such, is intended to be used in tandem with them.

The service differs from Google Page Creator in that the result is not a publicly-facing page, but rather like a corporate intranet site that can only be viewed by users who have been granted access. It is similar to Microsoft Office Live Workspace and WebEx Office, where users can simultaneously work in the same virtual environment.

Microsoft Office Live Workspace, however, requires that all users have Office on their desktop in which to edit the published document. Google's editing functions all take place within the browser and if they're not offered directly in Sites (like spreadsheet management), then another Google tool can be used.

To set up Google Sites, the user picks a name for his group, and is immediately given the option to create five types of pages: Web Page, Dashboard, Announcements, File Cabinet, and List. "Web Page" creation is almost identical to Google Docs, with text editing options across the top of the field.

A notable addition is the ability to switch to HTML editing underneath the main text editor. All formatting can be tweaked at the HTML level.

"List" gives the user three types of lists: Action Items, Issue List, Unit Staus, and the ability to make custom ones. When a list is chosen, the user can then populate it by clicking "add item," which opens up the fields to text. 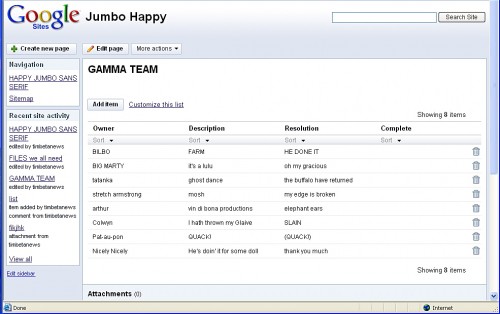 "Announcements" behaves like a message board, and "File Cabinet" allows users to upload their own files that can then be shared by all who access the site, or links to files hosted off-site. "Dashboard" is almost identical to the Web page editor except that it is laid out to accommodate the myriad gadgets that Google offers (media player, maps, weather, clock, picasa slideshow, calendar, games, and plenty of eye candy junk.)

It also contains the ability to view --or revert to-- previous versions of the site.

Although Google Sites can be used for non-corporate groups, it's not designed for public access like Ning.com, which offers the ability for users to create their own social network type site based upon a common interest, hobby, event, or topic.

In other Google news, iGoogle will be adding ad space in canvas view so that gadget developers may monetize their widgets. Advertisements will be limited to canvas view and certain types will not be allowed, including audio without user initiation and popups.