Google yesterday launched Lively -- its own version of the 3D, Avatar-based virtual world -- as an embeddable gadget. But social data barriers remain between Google and Facebook, which is granted separate but equal access to Lively rooms.

A Lively browser plug-in must first be downloaded for either Internet Explorer or Firefox, and Windows XP or Vista is required. Once running, the service asks for a Google ID or Gmail username and password to begin. From there, the user can create his own avatars and Lively Rooms (think of them as more of a series of graphically-enhanced chat windows than a cohesive metaverse.) which can then be embedded in other sites, such as Facebook.

However, due to current disagreements between Google and Facebook regarding privacy and the sharing of social data, a large kink remains apparent in Lively.

As Google's help section for Lively reads, "Your Facebook Lively access is separate and cannot be linked to your Google Account." This means that if a user accesses Lively through Facebook, and already has a Google Lively ID, his Google account and related settings will not be attributed to the session. One of the top questions in the FAQ is, "How do I merge my Google and Facebook Lively access?" and the answer boils down to this: You can't. 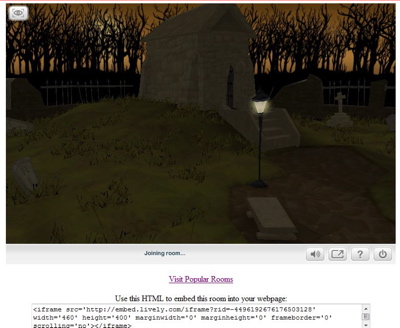 Compatibility aside, the beta itself runs smoothly when creating and customizing a new avatar and room. Google even has given these virtual spaces the same gadgets that can be used in other Google Apps. Videos from YouTube, for example, can be rendered on little television screens or in virtual movie houses, or user pictures can be placed into virtual frames.

The only time BetaNews tests were sluggish was when attempting to sign into rooms crowded with more than several dozen users. Some of the public rooms had over 2,000 users and took upwards of 10 minutes to join.