With initial topics ranging from "How to Backpack" to "Toilet Clogs," Knol -- Google's answer, of sorts, to Wikipedia - has now left testing and is ready for perusal and contribution by one and all.

"Our goal is to encourage people who know a particular subject to write an authoritative article," said Udi Manber, Google's VP of engineering, in a blog posting back in December, when Knol was first unveiled.

Based on that description alone, Knol doesn't sound any different from the Wikipedia, really. But unlike Wikipedia, where postings are anonymous, Knol gives bylines to authors, and allows them to make money by opting to include AdSense ads in their Web pages.

"The key idea behind the know project is to highlight authors. Books have authors' names right on the cover, news articles have bylines, scientific articles always have authors -- but somehow the Web eolved without a strong stardard to keep authors' names highlighting. We believe that knowing who wrote what will significantly help users make better use of Web content," according to Manber.

Maybe the simultaneous creation of Google Health has something to do with it, but the first crop of Knol articles -- written by the initial testers -- runs heavily to medicine, including subjects such as multiple myeloma, sore threat and strep throat, and cartilage injury and repair.

But the field of topics is wide open, and Google even says that it will allow multiple writers to produce articles on the same subject. 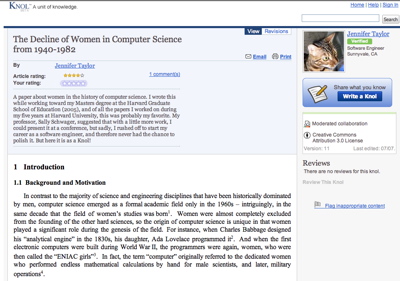 With Knol, we are introducing a new method for authors to work together that we call "moderated collaboration." With this feature, any reader can make suggested edits to a knol which the author may then choose to accept, reject, or modify before these contributions become visible to the public," according to the two Google officials. "This allows authors to accept suggestions from everyone in the world while remaining in control of their content. After all, their name is associated with it!"

Through a deal announced today, Knol authors can also add one cartoon to each article, chosen by the writer from the New Yorker's cartoon repository.