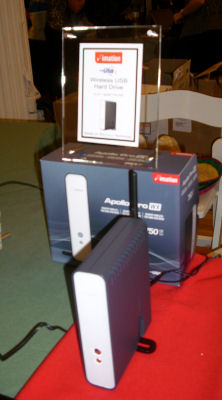 Compatible with Windows and Mac, the external drive is designed to work with other devices certified by USB-IF for wireless USB. So far, devices announced in this category include Kensington's four-port Wireless USB Docking Station and XPS and Latitude laptop PC models from Dell, BetaNews was told.

Set for release in the fourth quarter, the three devices will be offered in storage capacities ranging from 250 GB to 1.5 TB, according to a written statement from Imation. Each drive will come with an integrated swivel stand allowing for either vertical or horizontal orientation.

The WX will also ship with auto backup software for backup scheduling, restoration, and synchronization. Other capabilities will include a one-touch sync button, capacity gauge, data activity indicator, and external power supply.

Unlike some other Apollo models, the WX will not include a FireWire or eSATA interface, according to a product spec sheet distributed at the Pepcom show.