With the next edition of Microsoft's development tools suite, every commercial edition will feature some type of architectural tool that competes directly with a slew of UML-based add-ons, including a major revenue center for IBM.

Though Visual Studio 2008 was only formally introduced last January, the betas of Microsoft's development environment were often found in full production use as early as late 2006. Now with Windows 7 looking to be a reality for around this time next year, Microsoft finds itself accelerating the pace of its rollouts and tightening the beta schedule.

In light of this new reality, the marketing push is already under way for Visual Studio 2010, just a few days after the company held meetings with development partners. Though the public betas will likely still be months away, Microsoft this morning opened up a VS'10 microsite, complete with early screenshots and links to demonstration videos.

As Visual Studio Team System's marketing director Norman Guadagno says in one of these videos, posted this morning to the company's Channel 9 site, the key addition in all upcoming versions (not just Team System) will be graphical modeling of project architecture using industry standard practices and principles.

"There are multiple participants in the lifecycle of building a software product," Guadagno told the company's Dan Hernandez, "from designers, architects, testers, developers, [to] deployment. They are all engaged in the process, [and] there is a shared source and work item tracking and requirements that help drive the interaction amongst all of them, and...there is a way to monitor the flow from the very first concept of, 'What business problem are we trying to solve?' to actually delivery and deployment of the application.

"For some people, Application Lifecycle Management [ALM] means you have a source code management tool," he continued. "For other people, it means that you have source code management and requirements management and work item tracking and test integration and everything throughout all the lifecycle." The Team System edition will continue to include Team Foundation Server for source code control and work item tracking, he added, but as it appears now, some degree of concept creation and design that had been the exclusive purview of the Architecture Edition will become shared among all commercial builds (not counting Express, which Guadagno did not discuss).

Most software architecture prior to writing code takes place in the modeling stage; and in the UML modeling space, IBM's Rational Rose has been one of the major players, although the market for competitors has been respectably healthy. Microsoft's been on this list, but to a less-than-dominant extent with the deployment of Visio -- a product originally intended for building templates and org charts, which Microsoft acquired in 2000.

Two weeks ago, Microsoft announced it is joining the Object Management Group -- an alliance with which it directly and even brutally competed during the heyday of the Component Object Model, which in the 1980s and early '90s took on OMG's CORBA. But OMG is also the standards-bearer for the Unified Modeling Language whose architectural foundations are built upon by Rose and other products. As Guadagno explained in his video, UML is the reason Microsoft signed on.

"Part of the embracing of UML was the notion that there are multiple types of models, and we want to be able to provide tools that can do that [architecture] across different scenarios," he stated. "And by embracing UML -- in fact, delivering a tool in the 2010 architecture tool that's a really powerful UML modeler, with the feedback we've gotten from the customers we've already shown it too and the analysts, it's been, 'That thing just rocks.' Think about UML as really looking at code at the logical layer. UML is a big-picture, 'how do all these pieces fit together' [concept]. With the UML designers we have, you can build things at the code, the logical level."

With Visual Studio already at the heart of nearly every Windows development organization, the inclusion of architectural features in more code-driven buildouts such as the Professional edition could significantly impact the division of labor in such an organization, as Guadagno acknowledged.

"Architecture, as you well know...oftentimes is done by the architects somewhere else. They go and they pontificate and they bring back and architecture, 'Here you go!' Part of what we believe in this democratization, particularly around architecture, is, 'Let's make the tools easy to use, let's make them available to everybody who wants to participate, and let's make them functional, rather than somebody going off and creating an architecture, then handing it down, and people having to follow it...There's this huge mismatch, especially if somebody hands off a Visio file that says, 'This is your architecture.' [It] works, but you could do better.'"

The next edition of the .NET Framework, numbered 4.0, will play a major role in the next Visual Studio, although marketers today were keeping mum about many of its new features until a later date. A final release timetable has yet to be shared with the public, although calling this project "2010" gives Microsoft the freedom to roll it out as soon as the fall of next year, and as late as the following spring -- which, not too coincidentally, is the same target timeframe being speculated upon for Windows 7. 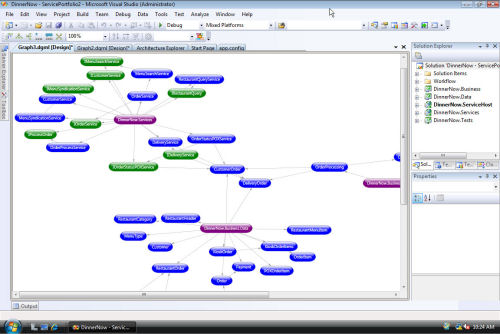