Got ears? Willing to roam outside your musical comfort zone? Then you should know the Mufin, man, and we can introduce you.

Descended from the Fraunhoffer IIS Institute research that brought you the MP3 file format, Mufin (MUsic FINder) analyzes individual songs, identifies several dozen attributes of the track, and suggests other songs that are similar to it. It's the first service to do so entirely by algorithm.

Each of the 4 million tracks currently known to Mufin has an "essence," as Mufin representation Peter Djekic puts it -- for example, its tempo, its harmonics, and its use of particular instruments. That fingerprint, for which Mufin collects about 40 data points, makes it both similar to other songs and uniquely identifiable. (If you've ever used Tunatic or one of the other online databases that "listens" to a track and identifies it, you've made use of such fingerprints.)

But some significant data points that humans (or human-based systems such as Pandora) might use to describe a song aren't of interest to Mufin's algorithm -- the identity of the artist, for instance. "David Bowie, for instance, has recorded in many different styles," says Djekic, and "Suffragette City" is not otherwise terribly similar to "This Is Not America." 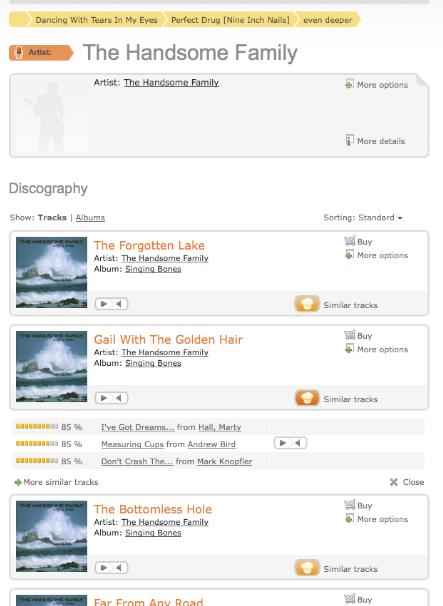 So to what does Mufin say "Suffragette City" is similar? Would you believe Kiss (glam rock, sure!) and Tim Finn, the beloved Split Enz and Crowded House singer-songwriter (wha?)? The fun of Mufin in our testing was its utter disregard for what you might expect it to deliver. Djekic says one of the more amusing matches to turn up in their testing was Britney Spears' "Oops I Did It Again" scoring high against Nine Inch Nails' "Closer." (And the mashup in your head begins...n-n-now.)

Mufin also takes no notice of musical era, which means that occasionally song matches reach rather far across the decades. For instance, Nick Cave's "Red Right Hand" dates from 1994; Frankie Laine's "Mule Train," which Mufin suggested as an 80 percent match for the Cave track, was recorded in 1949. (If you know both songs, you may be shaking your head at the comparison, but give it a chance and you'll hear some interesting alignments.) In other words, if your thing is 80s synth-pop, Mufin may force you to come to terms with plinky synthesizers not contemporary to giant hair and shoulder pads.

The most joyfully disconcerting aspect to Mufin's matches, though, is the international flavor. Mufin is Berlin-based and European acts are strongly represented in search results, which means that a curious listener may find him- or herself delving into works of artists even the most uber-hipster local music guru has never heard of. As the system expands, Djekic says, Asian tracks will also be represented. And the process of adding a track is trivial for Mufin -- its system can analyze an entire album in seconds -- so down the road the company expects to offer indie acts the ability to upload their own work for analysis and, potentially, search placement next to the likes of a Radiohead or Coldplay or Rihanna.

Of course, the trick is getting those tracks once you've fallen in love with them; Mufin's licensing for now allows for only 30-second track samples. Mufin links to iTunes for purchasing purposes (though iTunes doesn't always have the precise track you've come looking for), and Djekic says Mufin will partner with additional sites, starting with Amazon, in the near future. Licensing arrangements are also in progress, so eventually Mufin expects to offer not just clips but entire tracks for your listening pleasure.

The Mufin beta is currently by invitation only, but BetaNews readers may use this invite code to sign up.