A few weeks ago, Microsoft CEO Steve Ballmer gave clear hints of a Windows-branded product that will be deployed in the cloud. At 8:55 am PDT Monday, Ozzie christened this service Windows Azure.

As expected, Microsoft Chief Software Architect Ray Ozzie began his first day keynote speech at PDC 2008 (he'll be back for Day 2) by staking his company's new claim to software as services. "The Web has become a key demand generation mechanism," he said in his characteristic high-flying style, "becoming Web services' front door."

IT developers are finding themselves now needing to work more closely together, Ozzie said, preaching to the choir. Companies are finding themselves adding spare capacity to their main infrastructure, including adding spare data centers, in an obvious lead-up to the need for consolidation. He spoke of the problem that IT workshops find themselves facing, where their core applications are intensely "inwardly-facing."

"Is this cloud thing materially different than things we have known in the past?" Ozzie asked rhetorically. "The answer is, emphatically, yes."

Unlike his counterparts who have fronted PDC in the past, Ray Ozzie speaks using teleprompters. There are four situated at the front of the stage, which enable him to pace back and forth, looking at the audience in 60-degree angles -- looking stage left, stage right, stage left again, but rarely straightforward. Straight ahead has rarely been Ozzie's best side, and close to 15 minutes into the speech, he was still leading up -- not yet having revealed just what it is that he's talking about.

Twenty minutes in, Ozzie introduced "Windows Azure," which he did describe using the phrase "Windows in the Cloud." But is it an operating system? Maybe not, at least not in the sense we think about Windows; rather, it's a service that enables businesses to deploy Windows applications in the cloud. So for them, it may as well be Windows, because it becomes an alternative for deploying Windows Server on machines they own or in physical space that they lease.

"Today, for those of you in this audience, Windows Azure comes to life. It is not software that you run on your own servers, but it's a service that...runs on Microsoft data centers. It's being released today as a Community Technology Preview," pronounced Ozzie. 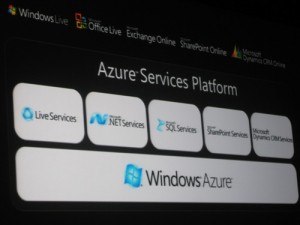 10:00 am PT: Verifying some suspicion, Microsoft said it will gradually be moving all of its enterprise-class software as optional cloud-deployed applications, under the Microsoft Online Services banner.

What has not been discussed yet is price.

9:28am PT: Here's the basic concept: Using Windows Azure, businesses will be able to model and develop distributed applications using existing .NET languages. A component called .NET Services extends the .NET platform to this large-scale deployment scenario. Then admins will be able to maintain these applications using a front-end platform that, at least at first, seems to have been inspired by what we've seen in Windows Home Server. However, there's a lot of XML editing involved in that latter process, which Microsoft's Steve Marx promises will be replaced with more intuitive UI features.

The Azure platform will consist in part of a concept called .NET Services, which will be a system for deploying .NET-based applications in the cloud. There will be no need to deploy .NET applications in the cloud first just for testing purposes, Srivastava said. Instead, new apps can be tested within a kind of sandbox using new editions of Visual Studio. That makes it clear that VS 2010, even in its beta form, will be getting a lot of use over the next few years.