Novatel Wireless' Mi-Fi portable broadband hotspot is about the size of a triple-thick credit card, and does the job of a 3G modem and wireless router all in one unit.

Novatel Wireless' Mi-Fi portable broadband hotspotis about the size of a triple-thick credit card, and does the job of a 3G modem and wireless router all in one unit.

The Mi-Fi connects to either an EV-DO Rev. A or HSPA signal and then shares its connection via Wi-Fi. It's battery powered and promises four hours of continuous use per charge, or forty hours on standby. Like other 3G modems, the device can be used in moving vehicles such as automobiles or trains.

However, it's unique in that it doesn't require a host machine to be connected to it in order to generate a signal. It can simply be put down, turned on, and connected. Details on average speeds and security measures have not yet been released. 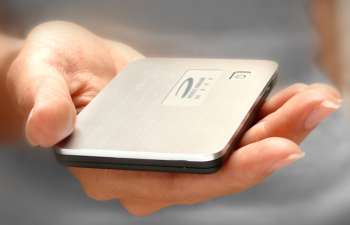 There are also not yet any mobile carriers signed on to support Novatel's newest device, but the company already supplies 3G devices for Verizon, Sprint, Telefonica, and Vodafone, so those are the likely first candidates.

Novatel Wireless' CEO Peter Leparulo said, "Our carrier partners will now be able to provide new wireless solutions and bundles for consumer and enterprise users. This will contribute to the continued growth of the addressable broadband market."

Mi-Fi will be available through mobile carriers in the first half of 2009.