Is it that at any other CES, we'd all be chirping about the advent of a working, non-hideous wrist phone? Or are we all just too jaded to believe? Either way, LG may have lost a perfectly reasonable wrist-mounted mobile phone in the stampede.

LG is a mighty big company, in the vicinity of which we are told Life's Good. What that means, practically speaking at a madhouse such as CES, is that there among the washers and dryers and huge flat-panel screens and touchscreen handsets and consumer diversions of every kind in their suburban-home-sized "booth," LG is apt to tuck in a few little flights of whimsy. A weary reporter appreciates the change of pace, LG appreciates the attention, and so it's all, as half the name suggests, Good.

The problem is the waiting for the flights of whimsy to take off -- especially in a year where attention coalesced around another phone, the one that's near to not only launch but, maybe, to saving its parent company's bacon. LG showed a prototype of the Touch Watch Phone last year. This year, it's operable...but LG reps told us that it won't be for sale until the second half of the year, and even then only in Europe to start. And just like that, press attention turned elsewhere. 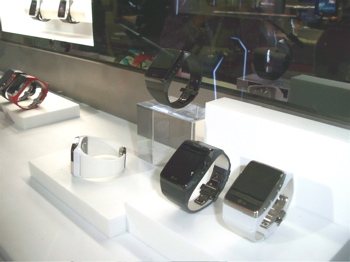 And yet if we're ever going to have a wrist phone -- if there's still a market for that old Dick Tracy dream -- this is probably it. Whatever the technical achievements tucked into the 68g / 13.9mm chassis of the timepiece, its greatest achievement may be that it didn't look utterly ridiculous.

Though most tech folk above the age of 20 can remember multiple attempts at this sort of thing (your reporter's personally still waiting for one of those bone-conduction fingerphones), LG chose to pare down the features and maintain sensible styling. The resulting gadget looks clean and not terribly mobile-phone-like; we saw several of the 13 offered interfaces that looked like perfectly acceptable face design. (Fashion tip: If you find you must own one of these things, stay with the analog dial.)

Even nicer, the phone sticks with doing phone-things -- no yen to be your spreadsheet editor, your photo display, or your game console. The dialing touchpad is simple and well-executed on the 1.43" screen, and though texting's not in our opinion the most elegantly executed function with the device, we like the text-to-speech functionality for playing your received texts back to you through (what else) a Bluetooth headset.

There's support for both MP3 playback and 3G service, and thus video with the built-in camera. LG's also folded in a good portion of noise-canceling technology, which should cut down on the contortions necessary to use this devices while walking down a noisy street. And, in a nod to the fact that the thing lives on your wrist, it's waterproof to 10 meters (meaning that there's no excuse for not washing your hands whenever necessary).

What's missing? For now, a carrier partner, which means that not only are big matters like price undecided, LG's still not sure how much memory it'll have. As with most mobile devices, battery life's also up in the air until the last possible moment; LG reps say that it's currently at 3 hours of talk time and 10 hours standby (!), but they're working on it.

There's no version yet for ladies, though the current watch looked nice enough on the relatively small wrist of one of the presenters. And you probably don't have service through a European provider. Ask again in late summer; by then LG will either be near solutions on these problems -- or the stampede of products released between now and then will have muffled the hype over the LG Touch Watch once again.