Sirius XM is in play, at least in the press 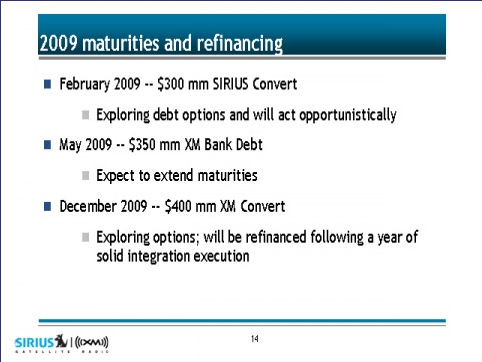 In the absence of hard information on a big business topic, it isn't exactly true to say the press always resorts to speculation. In many cases, parties that are incidentallly related to the topic -- and who may wish to be not so incidental in the near future -- often plays into the press' need to have some substance with which to fuel the story, in exchange for a little spotlight.

In the case of Sirius XM Satellite Radio, nothing is being said officially by either the broadcaster or by the company said to be in talks with it to help it through a trio of huge, pending debt obligations, satellite TV provider (also Sling Media parent, and one-time parent of Dish Network) EchoStar. But just like during last year's Microsoft + Yahoo takeover bonanza (the result of which, you'll recall, was less than nothing), folks who want to be involved -- and who may have an interest in appearing to show up legendary Sirius XM CEO Mel Karmazin -- are making it least appear as though the radio company is in play.

Karmazin -- perhaps doing what no other CEO could -- assembled a deal last year to merge his Sirius company with XM even after learning that XM had more outstanding financing debt than he first believed (by his own admission), and even during the onset of the worst credit crisis in modern US history.

So just like with Microsoft + Yahoo, either or both The New York Times and The Wall Street Journal are being used as megaphones in what may be a serious ploy for control of the company, and what may also be a chance to topple Karmazin in the public light. Last night, the Times announced that Liberty Media, the majority holder of DirecTV -- run by John Malone, a known rival to EchoStar's Charlie Ergen -- has some interest in a deal with Sirius XM. Press sources citing the Times story, including Reuters, are accenting the story just a bit by making it appear that Sirius approached Malone, not the other way around. EchoStar is known to have already purchased a substantial chunk of Sirius XM shares, after last December's issuance of new shares in the company to help stabilize its debt repayment situation.