Firefox 3.5 Beta 4: Mozilla delivers the speed, as Beta 5 gets under way

There are now (once again) three simultaneous development tracks for Mozilla's Web browser, as the first public beta of Firefox to be numbered 3.5 has officially hit the streets; the first private Beta 5 of Firefox 3.5 is being distributed to Mozilla testers; and the latest Firefox 3.6 Alpha continues to make headway.

It would appear Mozilla developers learned a lot from last week's code-frozen version of 3.5 Beta 4, as Betanews tests indicate the organization kicked things up a gear. The last code-frozen version before the public build produced a composite performance index score of 9.19 -- that's 919% the performance of Microsoft Internet Explorer 7 (not IE8) in the same system. But after refreshing our test virtual machine with the public Beta 4, that index kicked it above the 10.0 mark to place at 10.44.

How come the final build is faster? Much faster error handling, as shown by the browsers' scores in the Celtic Kane JavaScript test, which indicates that some of the temporary error handling code was likely removed; and generally better performance in all stages of the SunSpider benchmark. 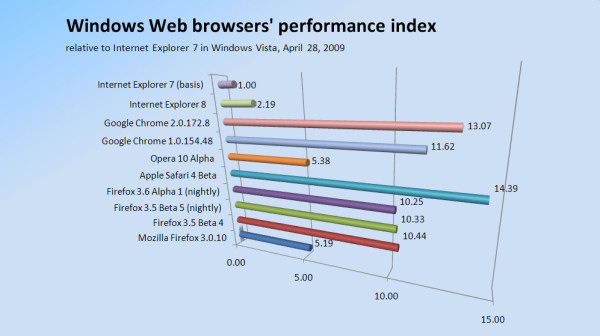 The public Beta 4 actually posted a slightly better performance score than the first nightly build of Beta 5, which posted a 10.33. Beta 5's Acid3 standards compliance score holds even with Beta 4 at 93%, and its Celtic Kane and HowToCreate.uk CSS rendering test scores hold up well against Beta 4. But the SunSpider scores show a general slowdown in most departments by 20 - 25%, which indicates that Beta 5 will be mostly focusing on features and usability rather than functionality.

And though the latest nightly build of Firefox 3.6 Alpha 1 ("Minefield") gained a tick in speed with a 10.25 index score -- compared to last Thursday's 10.14 -- it's been bested by 3.5 Beta 4, thanks in large measure to its improved JavaScript error handling. Despite our early fears that the new TraceMonkey JavaScript interpreter wouldn't perform in the same league as Google Chrome and Apple's Safari 4 beta, Mozilla has been able to dial up the speed considerably, posting scores that are now 33% than in our first tests of Firefox 3.1 Beta 3.

Still, a score above 10.0 puts Firefox in a very competitive position against Chrome, currently the second fastest browser in our tests, but only by a small margin against the Safari 4 beta. Both Safari's and Chrome's index scores of 14.39 and 13.07, respectively [correction], are helped by the fact that they post 100% compliance scores in the Acid3 test.

While all this is going on, Mozilla has now publicly announced the release of Firefox 3.0.10, which may now be automatically downloaded using older versions. We'd been noticing some poor performance since last week's release of 3.0.9, whose reign didn't last so much as one week. Since yesterday, we managed to trace the source of our hanging problems -- thanks in large measure to Mark Russinovich's Process Monitor -- to a corrupted bookmarks file, specifically places.sqlite. Deleting the file and having Firefox rebuild it appears to have solved this problem for now, though we cannot say for certain yet whether Firefox 3.0 or one of our add-ons is responsible for the corruption.

23 Responses to Firefox 3.5 Beta 4: Mozilla delivers the speed, as Beta 5 gets under way