Bing vs. Google face-off, round 1

Easily the biggest single change to the way I do business over the past quarter-century -- bigger than the ubiquitousness of e-mail, bigger than the mouse, bigger than push-button piracy -- is the search engine. Google is an invaluable research tool that my colleagues and I might have invested literally thousands in to be able to use, were it available two decades ago; though in all fairness, the search engine that truly blazed the trail in functionality in the early days of the Web was AltaVista.

Even AltaVista has some unique linguistic tricks that, if they could be applied to Google's colossal index, would yield mind-boggling results; so the notion that Google cannot be bested is probably false. But this time it's Microsoft once again that's laying down the gauntlet. This time, its search engine's latest revamp sheds what some had seen as its biggest liability: its brand name's ties to Windows, as if using Windows Live Search had anything to do with using Windows. The choice of Bing as the final title indicates that most of the good dot-com names really have already been taken; but that criticism aside, Bing deserves a fair shake.

How useful is Bing right now as a journalist-class research tool? Could it do the heavy lifting that Google often does, or is Bing really just for consumers and users who are easier to sway? With Microsoft's early full-scale launch of Bing this morning (and with full knowledge of where Windows Live Search failed miserably in the past) we decided to start throwing fast balls and curve balls to see how well Google and Bing can swing.

Psychologist Carl G. Jung was among the first to make a serious effort to build a contextual model of the complete human psyche, a way of discussing it objectively. But if a student or scholar is presented with just a citation -- no attribution, no annotation, just the phrase -- can he not only associate it with Jung but determine in what book it was originally written?
We started with a citation that is relatively likely to be quoted in an essay or theme:

The primordial image, or archetype, is a figure -- be it a daemon, a human being, or a process -- that constantly recurs in the course of history and appears wherever creative fantasy is freely expressed. Essentially, therefore, it is a mythological figure. When we examine these images more closely, we find that they give form to countless typical experiences of our ancestors. They are, so to speak, the psychic residua of innumerable experiences of the same type.

Keep in mind that Jung wrote in German, and that this is an English translation -- perhaps one of a handful. Can we find out not only whether this is a Jung quote, but where it was originally published and when, for purposes of a bibliography? 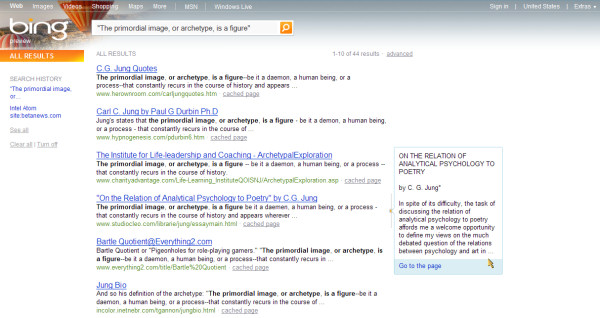 Right away, Bing did an excellent job of matching the quote. No doubt from the search results, we're looking at a Jung citation. Item #4 in Bing's list is impressive, linking to a page that gives what appears to be an accurate title. Being able to point to the little device on the right (it's not self-explanatory, though it is functional) that pulls down the first two paragraphs from the cited page, is also a clever and helpful feature.

But the thing about the Internet at large is that you can't always automatically trust the source of the information you find, no matter who or what fetches it for you. For example (no fault of Bing's), the page linked to in item 4 tells you that this essay, "On the Relation of Analytical Psychology to Poetry," was printed in 1978. Yea, you could say that, but the fellow passed on in 1961. 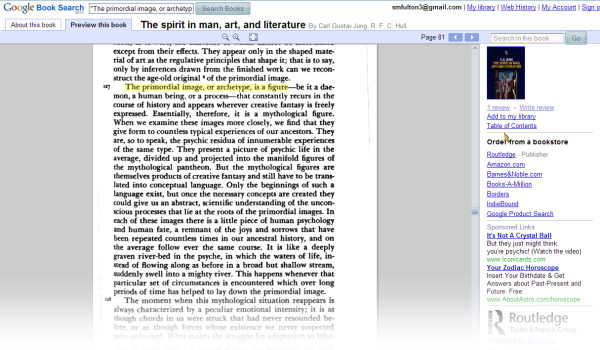 By contrast, Google's #1 result comes from...Google itself, specifically Google Books. It takes you straight to the page in The Spirit in Man, Art, and Literature where the essay first appeared. Google Books is one of that service's more controversial features; in its original incarnation, it presented scans of printed pages for books whose authors or publishers were apparently too busy with their own lives and businesses to send Google a letter "opting out" of the service. But in this case, you have to admit that going straight to the book itself -- and from there, to links to places where you can buy the book -- is far more effective than linking to a dubious source. So for the first heat, score 1 point for Google against Bing.

Next: The best price on a 1 TB hard drive

17 Responses to Bing vs. Google face-off, round 1