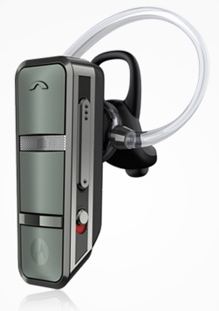 Naturally, when a person speaks, his vocal chords vibrate and disrupt the air, and those disruptions are registered by a microphone, which converts them into electrical signals. With bone conduction, the microphone is not measuring vibrations in the air, but rather vibrations taking place within the speaker's head. It eliminates the need to pass the vibrations through the air, where they'd be subject to noise interference.

The concept is used in a similar way in bone conduction headphones, which vibrate the wearer's mastoid bone to create an audible sound rather than disturb the air in front of the eardrum. Motorola's bone conducting device is strictly for speaking, though, and uses a large in-ear element to pick up vibrations inside the wearer's head and convert them into the outgoing signal, eliminating the effect of ambient noise.

"[It's] made for people who want the freedom to take hands-free calls despite extreme noise and wind environments. Whether you are driving in a convertible, attending a concert, or standing on a busy street, Motorola Endeavor allows you to hear and be heard," said Motorola Mobile Device Companion Products Corporate Vice President Wayne White in a prepared statement this morning.