HTC Hero is the biggest Android news since 'Cupcake' 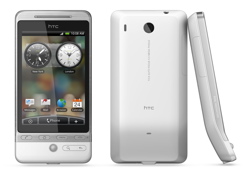 Today, Taiwanese mobile phone maker and principal hardware supporter of the Android platform, HTC unveiled its third Android handset, Hero, which is the first to make a departure from the familiar Android UI.

The first Android handset, released in the United States as the T-Mobile G1, received a great deal of derision for its chassis design, which has been called everything from "annoying," to "an ugly brick." But HTC is sticking with the "chin" design until naysayers get used to it. The Hero looks very similar to the G1, but with a greatly streamlined profile and no physical keyboard.

The Hero is based on a 528 MHz Qualcomm MSM7200A processor with 288 MB RAM, and is equipped with quad-band GSM/GPRS/EDGE and 7.2 Mbps HSPA/WCDMA radios. It also incorporated Bluetooth 2.0, GPS, a digital compass and "gravity sensor," has a 5 megapixel camera and a MicroSD slot. HTC has finally added a 3.5mm headphone jack to eliminate the need for a headphone adaptor, and has made the 3.2" HVGA touch display (320 x 480) multi-touch and fingerprint-proof, two features that have been in high demand for HTC's Android handsets.

The biggest announcements from HTC today were not about mobile hardware, but rather about software. Adobe today threw its weight behind Android, and announced that the Hero will offer full Flash 10 support right out of the box.

David Wadhwani, Vice President and General Manager of the Platform Business Unit at Adobe said, "As the first Android device with Flash, the new HTC Hero represents a key milestone for Android and the Flash Platform. With close to 80% of all videos online delivered with Adobe Flash technology, consumers want to access rich Web content on-the-go. The collaboration with HTC offers people a more complete Flash based Web browsing experience today and presents an important step towards full Web browsing with Flash Player 10 on mobile phones in the future."

Also chief in HTC's announcement today is Sense, the widget-based user interface for Android with a tacit lack of Google branding. Sense was known as "Rosie" in the rumor circuit, and is unique as a mobile UI because it includes profiles, known as "scenes," which call up different sets of widgets and features for different situations. The widgets are elegant, and let the user browse SMS, Text, Twitter, and Email messages directly from the home screen, or run an MSNBC-style stock ticker across it.

Hero will arrive in Europe in July on T-Mobile and Orange, and then in Asia later this summer. North America is expected to receive the device in late 2009.