"We want a Mexico without fear; we want a free Mexico," President Felipe Calderon said yesterday, regarding the dispatch of more than 5,000 armed servicemen to Michoacan.

The Mexican government is attempting to establish order over a population fraught with organized crime; and while police respond to violence, the government and its law-abiding populace has already begun its response to criminal communications by establishing a nationwide database of prepaid cell phone users.

Similar to the way every gun sold in the US must be registered, so too must every prepaid cell in Mexico. Because of the anonymity and freedom the devices afford, they are frequently used as the central tool in intimidation, extortion, and kidnapping plots and are smuggled into jails to keep imprisoned gang members connected. Kidnapping is pandemic in Mexico, and though many go unregistered with the police, some estimate that more than 70 people are kidnapped in that country every month.

By assigning an identity to prepaid devices, legislators are hoping to see a drop in this sort of criminal activity.

The Federal Telecommunications Act was amended on February 9 this year, adding the clause that all prepaid cell users will be logged in a national register known as RENAUT. There, operators must store all call logs, texts, and voice messages associated with each user for one year. The information in this database will only be made available with a court order in legal proceedings. 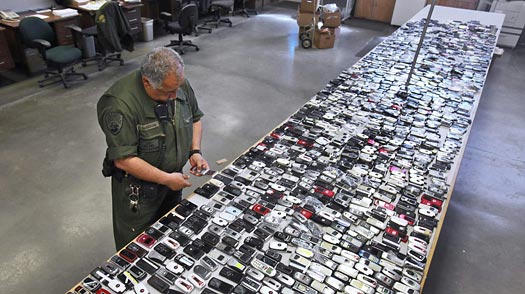 The Mexican Federal Telecommunications Commission (Cofetel) said this week that in the three months RENAUT has been in place, it has already collected data on 8.73 million mobile users out of the estimated 76.6 million total.

Users can register via a free text message, directly through their service provider, or through the RENAUT Web site, which demands that the user enter his name, address, and CURP (Clave Unica Registro Poblacion), the national ID number which is used in the same way a Social Security number is used in the United States. This also means if someone loses their prepaid phone, it must be immediately reported to the carrier.

Similar laws are coming into effect elsewhere in the world, such as in Greece, where Minister for Transport and Communications, Evripidis Stylianidis, said anonymous cell use by "drug dealers, immigrant smugglers and blackmailers" is hindering the police. In Greece, anonymous prepaid phones were used in an illegal wiretapping scheme during the 2004 Athens Olympics that targeted the Prime Minister.