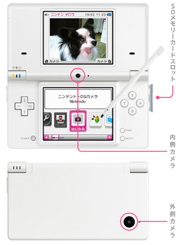 Beating Microsoft to the punch, a system update at 5:00 pm EDT this afternoon will turn the Nintendo DSi into the first Facebook-integrated video game system.

At E3 2009 in June, Facebook announced that it would be making its way onto video game consoles through Facebook Connect, the social network's open identification platform. Microsoft, Nintendo, and Electronic Arts all announced that they would be integrating with Facebook.

With today's update, the Nintendo DSi camera application will be able to upload photos directly to a user's Facebook profile. Previously, the only way to move photos from the DSi to another platform was by copying them to an SD card, this application capitalizes on the handheld's Wi-Fi connectivity.

Microsoft's Xbox Live integration with Facebook and Twitter is not expected to go live until the fall.