Google Chrome 3 continues to accelerate even as it adopts themes

Google operates its Chrome Web browser development process in three channels, all of which are under construction to some degree. The current "stable" channel is Chrome 2, which new users download by default; if they so desire, they can obtain a "beta" version of Chrome 3 instead. And then there's the "dev" channel, which is one step above and contains some code that could very well crash the browser.

With its latest drop of a developed version from the dev channel into the beta channel today, Google claimed a 30% speed differential between release 3.0.195.4 and the current stable release general users are downloading. "Google Chrome is now smarter about prioritizing the requests for the new page -- for instance, fetching text, images, and video for your new page -- ahead of the requests from the older pages," reads a blog post today from Google engineer Glen Murphy. "Loading pages on this beta release should also be faster than ever with DNS caching, more efficient DOM bindings, and using V8 for proxy auto-config."

We decided to test that figure out for ourselves. In preliminary tests this afternoon using our physical Windows 7 RC platform (which probably won't have that "RC" beside it for much longer), the speed gap we recorded using our Betanews Web browser test suite, between the latest stable release and the latest dev channel release 3.0.196.2 (which should be even faster than the latest beta), is about 24.5% -- roughly in line with Google's claims.

In Windows 7 RC, the latest dev channel Chrome 3 posted a performance index score of 16.70 -- another record. That means, all things considered, the very latest Chrome 3 performs with 16.7 times the speed of Internet Explorer 7 (the older version, not IE8) in Windows Vista SP2. The latest stable Chrome 2 posted an index score of 13.82. Our performance suite also contains the Acid3 test, which is not a speed test; and both browsers scored 100% for Web standards compliance.

By comparison, the latest Firefox 3.5.2 stable release in Windows 7 RC posted a 9.08 on our index.

Google's tests also included the V8 benchmark, which it uses internally to test Chrome's V8 JavaScript interpreter. V8 is not a part of Betanews' test suite, but we gave it a run this time anyway to see whether that 30% gap applies to the cream of the crop. With higher numbers reflecting better scores, the latest dev channel Chrome 3 posted a V8 score of 3756 versus Chrome 2's 3093, a difference of 21.4%. Firefox 3.5.2 posted a 351 in our most recent iteration of that same test.

There are several reasons I've decided not to use the V8 test in our benchmark suite. One of them is the fact that IE7 in Vista -- the slow browser we use to represent 1.00 on our index -- won't run it at all. But also the scores that V8 displays on browsers other than Chrome can vary wildly from minute to minute. On the same day, Firefox 3.5.2 posted a score of 280, followed by a 351, and then a 373, before moving back into the 200s. This indicates a level of volatility I'm not comfortable with for testing browsers other than Chrome. What's more, it seems unrealistic to suggest Chrome 3 delivers 10.7 times better performance than the latest stable Firefox -- 84% better is much more realistic, and more in line with what we see in the real world. 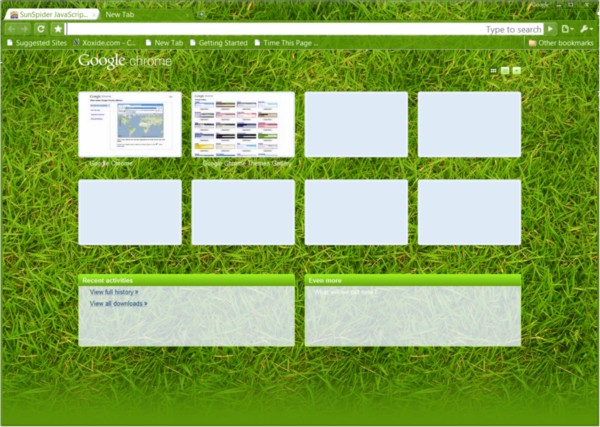 Today marks the opening of Chrome's Themes Gallery, which is Google's first official effort at letting users "skin" the browser. Right now, themes are only functional for users of the dev and beta channel releases.

In our tests, we noticed that themes, at least for now, are basically comprised of bitmaps (some of which are repeating tiles) in place of objects' standard appearance. They change these objects' color but not their shape or placement. Also, at least for now, they override the transparency that the Classic theme displays in both Windows Vista and Windows 7.

Even the "Transparent" theme is somewhat of a joke, comprised actually of the checkerboard pattern that's used to demarcate transparent layers in Photoshop. And some themes, like "Grass" shown here, can also make the controls a little bit obscure -- green-on-green doesn't necessarily make for legible, eye-strain-free controls. But if you enjoy lawn mowing, then you can certainly almost smell the Grass theme.

Strangely, but ever so slightly, themes may slow the browser down. Our tests noted that SunSpider benchmark scores trended down by about 1% - 2% whenever Chrome 3 had a non-Classic theme loaded -- not enough to shout "foul" over, but enough to make one want to round that 30% speed gap figure to closer to 20%.