Just as Microsoft and Nokia announced Office will be coming to Symbian S60, the mobile software company that makes Office-compatible readers for Symbian UIQ and S80 released a new productivity app for Android. 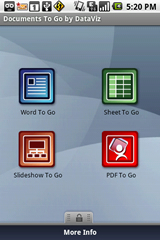 DataViz DocumentsToGo 2.0, released yesterday in the Android Market, is a portable productivity suite that lets users view, edit, and create new Word, Excel, and PowerPoint documents and supports a number of formats including the latest Adobe .PDF files. 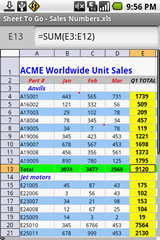 A free version of DocumentsToGo 2.0 is available in the Android Market as well, but it only gives users the ability to view Word and Excel documents in "Word to Go" and "Sheet To Go." For the ability to edit and create new documents in the app, users must spend $29.99 for the full version.

The previous version of DocumentsToGo was considerably cheaper, at only $19.99 for the full install, but users who purchased the earlier version can upgrade for free, and utilize the Cupcake-enabled functions such as soft keyboard text entry, and live folders. 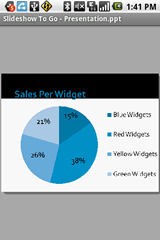 Unfortunately, there is still no way to open e-mail attachments in Android's native POP/IMAP Mail client. DataViz says, "The 'Email' application does not currently let you download attachments other than pictures, which is completely out of our hands. We would expect that a future update will address this issue. In the meanwhile, you may want to forward your messages containing attachments to your Gmail account and download them from there. You can then view and edit them in DocumentsToGo."

Likewise, the app does not yet support printing, but there are a couple of printing solutions (PrinterShare, Send 2 Printer) for Android that add that functionality.