Bing vs. Google rematch: Who's getting better, quicker?

Two months ago, Microsoft unveiled its revamped Bing search service, touting it as a "decision engine." There were some genuine new advantages which we did discover, but not everything appeared ready for Bing's first outing, and we were told to expect improvements to some features "in the coming weeks." Not months, weeks.

So this is August, and (do forgive me) what hath Bing brung? In our June series of Face-offs, the final score was Google (4), Bing (3) -- not necessarily a runaway, but good enough for the champion to not feel immediately threatened. With Google testing improvements to its search engine, we wondered if we'd find any evidence of tweaking on Bing's side as well. We've decided to put both services through the same paces a second time to see which service is the one that's really gunning for a rematch.

Obscure literary quotes. In our very first heat last June, Bing did a good job of identifying a passage from psychologist Carl Jung, but Google took us straight to the book. This time, we wondered whether Bing or Google could pull up the identity of a translated poem that is itself excerpted, perhaps only once in modern literary history, in a semi-obscure work of fiction. The original source of the poem is an English-language translation of the Diamond Sutra, a statement of the Buddhist faith believed to be the oldest printed book in existence. It could be translated many ways, so the specific English translation we used might give away its translator.

The translator in this case is Aldous Huxley, who cited it in one of his last works of fiction, Island. To begin, we tried the first line of the excerpt, which is so unique that it could only apply to either Island or to some discussion of the Diamond Sutra. Item #1 from Google was a page of Huxley's various poems from the same book, while #2 led to a Google Books excerpt from Island itself. No mention of the Diamond Sutra, but still a correct identification.

Bing returned six results for the query as opposed to Google's two, and the #1 result was the same page of Huxley's poem excerpts from a site devoted specifically to the book, Island.org. But #5 on Bing's list was a surprise: a link not to Google Books, but to an independent researcher's page devoted to Aldous Huxley where the entire text of the book could also be found. Granted, the excerpt in question wasn't automatically highlighted like in Google Books, but it wouldn't take but a moment for the browser user to hit Ctrl+F and do an in-page search.

Here's something else we discovered, curiously enough: When we tried for a unique phrase from later in the poem, frog's soliloquy, Google no longer retrieved results from its own Google Books, even though that phrase definitely appears in its version of the excerpt. Bing, meanwhile, continued to point to Huxley.net.

So essentially, it really is possible for Bing to pull up results that are as useful as Google's, in situations where someone else besides Google compiles the database. It's curious that Google's search results omit the reference to Huxley.net, especially since that site has some other Huxley-related resources that might be of interest to a researcher. It's that curious omission which prompts me to give Bing the nod in this particular heat.

Best price on a 1 TB hard drive. One of the features Microsoft touted right away as a proof-of-concept of its "decision engine" motif is its shopping service. We really liked what we found back in June.

So what happened to the big "Shopping" button on the left side? When we tried our 1 TB hard drive entry in Bing a second time (obviously, without enough information in the query to infer that we're shopping for prices), we had to click on the little-bitty "Shopping" button on Bing's menu bar, which today is buried beneath a picture of a ram's horn. 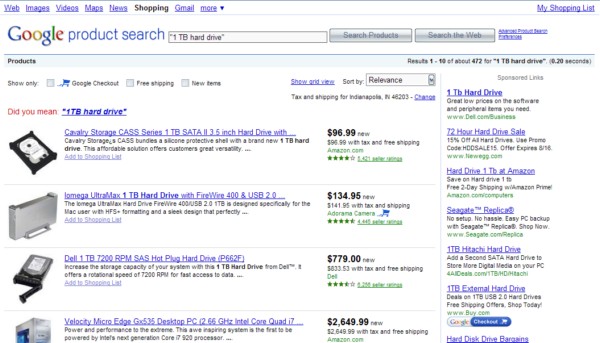 In fairness, Google makes you click on the same button, but I can't exactly say that Bing is improving for working more like Google. While Bing's Shopping page results remain fairly functional, Google has made some subtle improvements over the past few months. Most notably, the range of prices from various retailers (some of which were a bit dubious, and some which were clearly misinterpreted) has been replaced with a single price and a single vendor listing.

On the one hand, that seems logical -- folks who are shopping for hard drives are usually looking for the best price. Usually. But the second criterion is often quality of vendor; and at the moment, you actually cannot go "shopping," as it were, between vendors -- Google does the shopping for you. I don't want anyone else's "decision engine" doing the deciding for me, thank you very much (which is bad news for Amazon, which gets some serious star treatment in Google's rankings). When I click on Google's listing, it takes me to the vendor it selected; when I click on Bing's listing, it takes me to a list of other vendors offering the same item, which is something I actually want to see.

So I'm actually increasing the size of this particular win for Bing, even though Bing's demotion of the "Shopping" button isn't really an improvement.

Next: Finding that girl from that show with the other girl, you know the one...

9 Responses to Bing vs. Google rematch: Who's getting better, quicker?