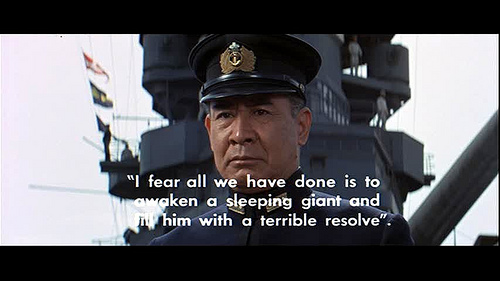 The problem with sleeping giants in recent years is that "terrible resolve" hasn't necessarily gotten them very far. Of course, this applies outside the information technology industry as well. But not even the Internet -- the biggest revolutionary IT technology since the personal computer -- is creditable to any one major player or allied force. Historians will note that almost every company or group to attain success through the Internet did so either 1) completely by accident, and/or 2) without any substantive plan as to what to do with that success once it attained it.

But the last great "sleeping giant" episode in the history of the IT industry was one of absolute, intentional, and steadfast resolve. The landscape of our lives and work has been shaped by this chain of events. It was triggered by WordPerfect, and the terrible resolve was manifest in Microsoft Office. I watched from very close range as, within a span of mere months, the axis powers that commanded respect and even awe -- WordPerfect, Lotus 1-2-3, dBASE, and Harvard Graphics -- deflated to mere also-ran status. Their manufacturers, in an often comical display of poor timing and miscommunication, self-destructed.
As a result today, when you ask businesses worldwide why they use Microsoft Office, the majority of responses you'll get say it's because it's the productivity suite for Windows. And when you ask those same businesses why they use Windows, the answer is because it's the operating system that runs Office.

The first absolute sign that the shockwaves from that 1986 turn of events were at last subsiding, came yesterday. Microsoft announced that Office Web Apps -- which will convey the essence of the productivity tools used by tens of millions of customers today -- will be hosted from its servers for free. A tremendous chunk of the company's revenue, and one of the pillars of its highly successful business plan, is being sacrificed. Office 2010 will continue to be sold, and new business revenue models will be constructed for hosting Office Web Apps. But a major chunk of a business that provides Microsoft with $16 billion in annual revenue, is being chucked in an effort to retain the strength of the brand, and recover lost ground for another business that has never seen that much revenue in its history, and may never hope to.

What triggered this move is obvious: Google attacked Microsoft's home turf, and with a Web applications suite whose quality makes Novell's final WordPerfect for Windows seem downright satisfactory. There's considerable wisdom in the argument that Google did this not so much to attain power in the applications segment, as to make Microsoft devote resources to defending its power base, which would divert resources away from its efforts to build a competitive online advertising revenue structure. Tying Chrome OS to Google Apps would create a two-pillar revenue structure similar to how Windows and Office are intertwined -- a formation which in and of itself must have made Steve Ballmer's skin crawl.

It seems like a logical enough theory until you realize that Microsoft's most strategically plausible retort, thanks to the curious geography of the IT industry, runs right through Google's home turf: To defend Office as a brand, Microsoft must make Windows Live more powerful. The only way to amplify Office is through the Internet; and right now, the only company with the resources and wherewithal to turn Google into the Ashton-Tate of 2012 is Microsoft.

Should Microsoft's bold act of self-defense be successful, Office Web Apps could become the leading center of productivity resources on the Web. Office Web Apps could be tied to Windows Live the way Office is tied to Windows. And that will mean more subscribers to Microsoft's cloud storage services, and that the company can build a center of online activity around Office Web -- something like what MSN has always tried to be, except without having to live with the dark stain of being MSN.

But what would have been gained through all of this, and what will have been lost in the process? If you ask consumers why they use Windows, the reason you'll get most often is this: It's the operating system that came with their PC. The two reasons they chose that PC were to get on the Internet, and to use Office (Word/Excel/PowerPoint). As of 2010, neither of those reasons for choosing the PC will absolutely necessitate buying Windows, which leaves only the fact that OEMs choose Windows.

In a world whose functionality is delivered online, will there be a need for Windows, the monolithic operating system whose Registry is designed to record the state and specifications for thousands of applications installed on hard drives? My answer is a mostly technical one: Yes, there will, because something needs to be capable of providing an homogeneous platform in a PC industry with infinite combinations of hardware. That's what OEMs want, and that's what Microsoft will very likely continue to deliver. When Google says the Web is the platform, it means the haphazard collection of planks, nails, and duct tape on which it's currently dancing; it's the hardware platform that keeps the IT industry moving, and right now, it's Microsoft that's greasing the gears and fueling the drivetrain. Google really wouldn't want to trade places.

Microsoft's role as the principal provider of the interoperability platform for computing devices is probably safe and secure for at least the next five years. It's knowing this that makes me wonder whether the company really needed to sacrifice one, if not two, of its consumer revenue channels, just to ensure that Google Apps -- which really is for productivity what the Ritz Brothers were for comedy -- doesn't gain a toehold in a market no one is really certain it even needs. Maybe the sleeping giant has been awakened, but its actions -- at least at present -- lack the signature of resolve that we've seen once before, so terribly and so brilliantly.