Launched on Tuesday, Bento 3 is the third major release of the personal database from Apple's FileMaker division since the original rollout of the product in January 2008.

With the new Bento 3, users can employ Apple Bonjour, a technology intro'd earlier for iTunes and iPhotos, to let other users on a Wi-Fi or wired LAN locate and view information in their personal databases.

Bento 3 users can protect their information by allowing access only to those who know a "sharing password," said Ryan Rosenberg, FileMaker's VP of marketing services, in a briefing for Betanews. The new version also adds 128-bit AES encryption, which can be used for safeguarding either the entire database or fields.

Added to the 25 templates already included in Bento, the ten new ones bring the total to 35. But users can also download any of 286 templates from the online Bento Template Exchange that went live on June 16, Betanews was told. 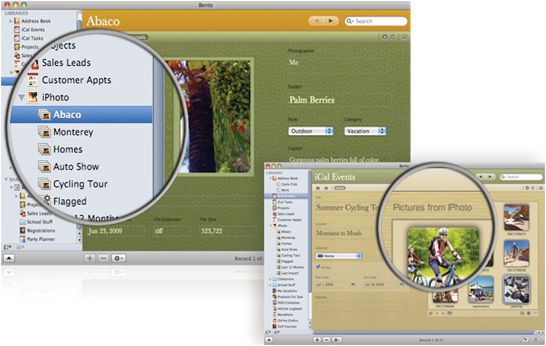 In a demo, Rosenberg showed how a husband and wife might use the new Home Search template in Bento 3 to give individual ratings to new houses they've visited, and then to share their respective ratings of the various buildings over a network.

But although people continue to use Bento for these and other personal purposes, including keeping track of hobby collections, recent research by Apple's FileMaker indicates that many users have turned to Bento for running small businesses out of their homes. One home-based appellate lawyer in San Francisco, California, uses Bento to organize information about clients and cases, said Rosenberg.

Mac users in larger organizations tend to gravitate to the FileMaker database, according to Rosenberg. Apple first devised Bento to compete with Microsoft Access, he noted.

Through the new iPhoto integration in Bento 3, you can see photos in Bento through any of four views: Table, Form, Split, or the new Grid view. You can link photos to contacts, projects, events, and other Bento data, and you can store more information about a photo than what iPhoto is able to accommodate, the VP elaborated. The new Grid view can show text along with thumbnails of pictures, forms files, and movies.

Available immediately, Bento 3 is priced at $49. Apple's FileMaker is also offering $20 rebates to people who own Bento 1 or 2.

Last May, FileMaker unveiled a smaller edition of Bento specifically for the iPhone and iPod Touch, Rosenberg pointed out. A free update to the $4.99 mobile edition -- supporting synchronization with the Bento 3 desktop edition for Mac OS X Leopard and Snow Leopard -- was also announced this week.