The New York Times has cited an unidentified source said to have knowledge of Microsoft's ongoing negotiations with the European Commission, as saying that the company will comply with a suggestion made by three of its chief rivals in the Web browser business -- Mozilla, Google, and Opera. Specifically, the report says, future editions of Windows 7 for European customers will randomize the order in which users' choices for default Web browsers will appear during setup.

You'll notice that Apple was not listed among those making the suggestion, and that may be because Microsoft's revised plan in order that Internet Explorer would not be listed first, would have alphabetized the list by manufacturer's name, placing Apple Safari first instead.

Betanews has contacted Microsoft for an official comment on the matter, which Microsoft tells us is forthcoming.

If this news is confirmed, then it will be the first indication of the nature of the "interested parties'" reaction to Microsoft's revised proposal, issued last July. Two months ago, the European Commission said it would test the revised proposal, in a statement that gave Microsoft hope it would be approved, and the EC's objections would be put to rest.

Comments from individuals and companies that enrolled themselves as "interested parties" in the EC's action, were expected last month. Although there was no stipulation that those comments would be made public, it now appears that their contents were kept secret. 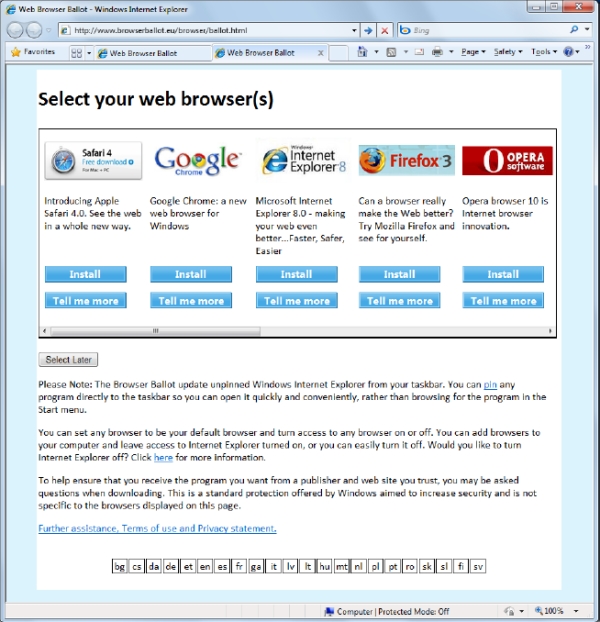 But what they were likely to have said is no surprise, especially after a contributor to Mozilla Firefox posted her own personal objection to the revised plan. Stating up front that her views did not necessarily represent those of Mozilla, UX contributor Jenny Boriss wrote last October, "A user simply can't choose a browser that's 'right for them' based on a logo and a couple sentences. Side-by-side comparison works for items with easily comparable traits, like price or size or length of time. But browsing experience is just that: an experience. No one can rate experiences they've never had."

Given no criteria of experience -- and perhaps no way to check the Web for suggestions, not having access to a browser yet -- Boriss claimed the user would use whatever criteria remained: "Windows users presented with the current design will tend to make only two choices: IE because they are familiar with it, or Safari because it is the first item."

Public response to that point of view, among Betanews readers and elsewhere, weighed heavily against Mozilla and Microsoft's other competitors, which may have lent to the apparent decision to keep interested parties' objections secret.

Blogs citing the Times article this afternoon are saying that Opera Software was the one company that raised the objection. However, the Times listed three companies, and Opera happened to be the one listed first.

Sources are now telling Bloomberg News that Microsoft's concession could give cause for the EC to close its case against Microsoft by December 15.