In a peace offering to newspapers, Google offers a new news format

Exactly what online news should be or become is a subject that consumed the "blue sky" discussions among publishers since the late 1990s. Despite every concept they've ever created, tried or untried, what publishers typically end up with is either something that looks segmented and departmentalized like CNN.com or NYTimes.com, or is basically a blog whose scroll reveals a history of news, like it was printed on a roll of paper towels.

So the concept that Google Labs began attempting yesterday with its "Living Stories" concept (whose name for some reason brings to mind a certain peacock) is absolutely not new. It's been discussed before, in some fashion or another, and even approved -- for what it's worth. But on a large scale, it's never been done until yesterday: assembling all the stories relating to a pertinent, current topic on a page devoted to the topic, not the publisher and not some permanent department of the publication like "Sports" or "Tech."

Conceptually, the Living Stories concept makes a lot of sense, making the topic the center of the news. It requires the publisher to think differently about not only how news is presented, but how it's gathered. Publications typically assign reporters based on their defined coverage area, or "beat." Over the years, I've been involved in discussions on the subject of topic-centered publishing, and one question I've often heard raised is, "Won't this mean we have to start designating topics to reporters rather than beats?"

At last, the Washington Post and The New York Times have decided to actually try the experiment in practice, and see the answers for themselves. The papers are Google Labs' initial partners, although which paper came first is a matter for some debate -- naturally, the Post's Howard Kurtz reported this morning that the Post was first.

As Google News product manager Josh Cohen implied in a blog post yesterday, the question of which came first isn't as important as who's providing the platform: "This project sprang from conversations among senior executives at the three companies. We shared thoughts about how the Web can work for storytelling, and the Times and Post shared their core journalistic principles. The Living Stories started taking shape over the summer after our engineering and user interface teams spent time in the newsrooms of both papers. We're providing the technology platform, the Times and Post's journalists are writing and editing the stories, and we're continuously collaborating to make the user interface fit with their editorial vision." 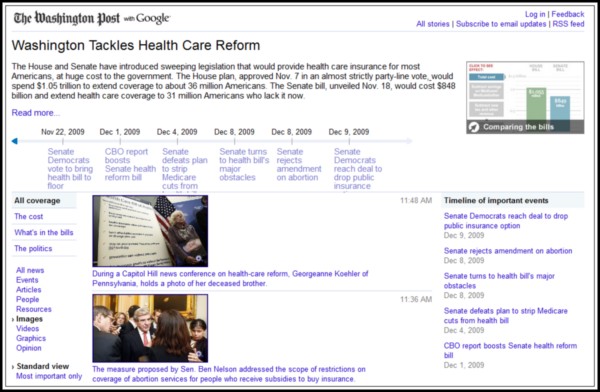 Kurtz' reporting also revealed an interesting detail: The platform that Google is providing will also serve as the container for the papers' content -- it will actually be hosting these stories, perhaps for as long as the next 90 days.

In the initial run, it appears that the Post and the Times have divvied up the rights to certain topics. For example, all stories pertaining to Health Care coverage are covered by the Post, while the Afghan War and the Swine Flu are topics delegated to the Times. This precludes the first stage of the experiment from being able to demonstrate what could have been its most impressive achievement: blending together the timelines and the resources from multiple sources, into a single portal.

Maybe a single portal cannot be accomplished without appointing some automatic algorithm as its gatekeeper -- something like Google News, which publishers have learned to simultaneously love and hate. So will the culmination of the Living Stories project be a single, viable business model for online newspaper publishing, in which Google plays a role? Betanews asked Google spokesperson Chris Gaither this afternoon.

"Our goal from day one -- a goal shared by both Google and our partners -- has been to take whatever lessons we learn and tools we develop together and make them broadly available to any news publishers interested in taking these ideas forward," Gaither told Betanews. "In the long term, this could be one of many solutions that increases the amount of time people spend on news sites, which could lead to more revenue for publishers. But right now we and our partners are most interested in experimenting with ways to build more engaging Web experiences for users."

Next: Is there any money in it?

One Response to In a peace offering to newspapers, Google offers a new news format