Would anyone care for a 'superphone?' Google's platform play with Nexus One 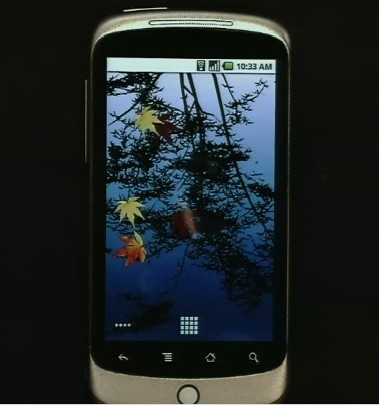 The new Google Nexus One shows 'Live Wallpaper,' with its own interactive water puddle.

The trifecta that was Apple's iPhone introduction in January 2007 was on account of the successful introduction of a software platform and a truly revolutionary device, coupled with a massive surge in the functionality of iTunes -- a compelling device on an intriguing platform, which itself was on a respected and advanced platform. Matching that achievement quite literally may never be possible for a smartphone, but it may be possible for something else.

The question today is, is the Google Nexus One that something else? There's every reason to believe it will be a competitive device running on a newly respected platform that has seen some great improvements in recent months, Android. But Google aimed for the fences today by attempting to characterize a phone built by another manufacturer, with a software platform that's already in existence and a hardware platform that's already been proven in the field, as something else -- something Google would like for you to call a "superphone."

"The Nexus One is an exemplar of what's possible on mobile phones through Android," said Google Vice President for Product Management Mario Queiroz, during this afternoon's press session at the company's Mountain View headquarters. "The Nexus One belongs in an emerging category of devices, which we call superphones."

And that was literally the end of that bullet point, as Queiroz closed his prepared remarks right there and began diverting to give credit to HTC. Although at first, Queiroz said the phone was designed in "very close partnership" with HTC, much later in the presentation, Google Vice President for engineering Andy Rubin would shift even more of the credit to HTC, telling a PC World reporter it would be "inaccurate" to describe Google as the designer of Nexus One.

Few were confused by the phone itself, which appears to be the next incremental step up from the HTC Droid Eris, introduced late last year on Verizon Wireless. The 480x800 AMOLED display promises to provide the very impressive color quality and contrast of the Eris, but with the resolution of Motorola's Droid phone. The hardware platform is Qualcomm's Snapdragon, the same one used for new netbook-like smartbooks like Lenovo's Skylight, introduced earlier today. So Nexus One will not be a stepped down computer; for all intents and purposes, it has the heart of a real netbook or even notebook (at 1 GHz), in pocket size.

Although Nexus One is not a multitouch device, it does include a secondary trackball-like sensor on the bottom, a glowing multi-colored ball that Google refrained from calling a "pearl." However, besides characterizing its capability of being multicolored as an application in itself, the trackball was never demonstrated actually performing a function.

Nor was the touch-screen keyboard demonstrated, although it was seen briefly during a demonstration of voice recognition capabilities. If the Nexus One truly has a groundbreaking application at this point in its evolution, it's the ability not just to respond to voice command, but to translate any voice into text. That feature uses Google's voice translation server, and requires Internet connectivity, though the demo did show the device could translate text faster than most thumbs could possibly type it.

The first and only view of the on-screen keyboard for Nexus One, which popped up during a demonstration of voice typing.

But even though Nexus One will be kicking off that feature, the native voice-enabling of text fields, according to Tseng, is a feature of Android 2.1. So in the not-too-distant future, the Motorola Droid and HTC Droid Eris will be getting these features as well -- not-too-distant perhaps meaning just a few weeks.

Motorola's mobile device CEO Sanjay Jha was on hand today to acknowledge that the Nexus One, a device built by rival manufacturer HTC, was in some ways slightly superior to the Droid phone that Motorola currently sells -- a model that is believed to have been a holiday blessing for Motorola. Not that Jha would stand being edged out for very long, perhaps not even for a few weeks, he implied.

The presence of Motorola along with HTC during the launch of an HTC phone (although Jha had been "stuck in traffic" for the first hour), gave reporters on hand good reason to question what exactly is being launched here -- and a few of them asked that question just that bluntly today. Is Android a Droid phone, like Motorola's (since Sanjay Jha is seated right there) and like HTC's? There was no clear answer to that. What we heard today is that Motorola's and HTC's Droid phones will compete directly against Google's Nexus One made by HTC. But the two manufacturers are happy with that -- at least, so said Jha and HTC CEO Peter Chou, also on hand today -- because Nexus One expands the market, giving Motorola and HTC and the other partners in the Open Handset Alliance room to compete.

But to compete against other Droids? Or other Androids? What exactly is the platform here -- where does it begin and where does it end? Google's representatives danced around this subject today, actually appearing as though they couldn't adequately answer the question.

At one point, Queiroz presented Google's Web site for the direct purchase of Nexus One as a platform unto itself, giving reporters a lengthy demonstration of a frankly boring set of choices. Nexus One is available now through Google's online store for $529 unlocked, without contract. Today, it's available for $179 with a two-year contract on T-Mobile. And sometime this spring, presumably April, it will be available on Verizon Wireless in the US and Vodafone in Europe, for an unspecified amount with an unspecified contract term.
So as some reporters asked today, what makes the Nexus One a "superphone," worthy of its own platform name, if Google actively acknowledges that Motorola and HTC will be among the manufacturers competing against Nexus One with very comparable Droids?

Google did not have an adequate answer. "The difference between a superphone and a smartphone is just the evolution of the platform is such that the openness, coupled with these marketplaces and these app stores, that make it real easy for people to download third-party content, an ecosystem by which third-party developers can participate in the ecosystem, the [one-] gigahertz processors, the more memory, the gigabyte storage, these are all things that didn't exist two years ago," responded Google's Mario Queiroz. "We just thought that the industry needed another term to refer to these innovations.

An example of the 3D graphics library put to use on Nexus One to tip the gallery wall of snapshots to one side.

"This is just as powerful as your laptop was four years ago. If anything, you're carrying these around in your pocket, they're with you all the time, they're now always on. And that's all new. So we wanted to refer to it by something, and we think 'superphone' is the right way to refer to it," Queiroz attempted to clarify.

At that point, eWeek reporter Chris Preimesberger attacked the subject from the opposite direction, asking Motorola's Sanjay Jha to spell out how his company intended to compete with Nexus One. (It's a sign of Google's continuing experimentation with the notion of transparency, openness, but also inexperience that it invited a Nexus One competitor to speak at its rollout event.)

If there had been any distinctiveness in the Nexus One platform established by such granular factors as, for example, how customers are billed for monthly service (literally a platform feature, according to Queiroz), Jha made a wish and blew it away. "I think Nexus One is a good phone," Jha told Preimesberger. "I think the Droid is a good phone. I think that we will upgrade Droid to the software that's available on Nexus One, and clearly both Peter [Chao of HTC, pictured left] and I compete in the marketplace to deliver the best product we can. And we will deliver some good products subsequent to Nexus One."

8 Responses to Would anyone care for a 'superphone?' Google's platform play with Nexus One