It's been said that improvements to Web browsers aren't truly improvements unless the user can both see and feel them. Mozilla's latest efforts in that area have just been finalized: a new stable version of Firefox that not only provides more control features to the new Windows 7 taskbar, but lets you paste posters on its wall.

It's called Personas, and it addresses one of the few features gaps between Firefox and Google Chrome -- a browser that, besides being the fastest stable Windows Web browser in the field, is relatively bare-bones compared to Firefox and Microsoft Internet Explorer. Bringing back one of the more popular features attached to Netscape Navigator back in the '90s, Firefox 3.6 offers users a way to paste an image in the background of the browser frame.

In building up for this release, Mozilla gathered several thousand candidate images in a new gallery. And this afternoon, Betanews noticed that the organization was tweaking its download service so that new downloaders (you, for example, when you visit Fileforum to download 3.6 for yourself) will be steered toward this gallery.

Most impressively of all, you can see how a persona might look on your own browser simply by rolling over its thumbnail in the gallery. This is important because with Firefox, not all components appear in exactly the same place, due to exactly the trend that the Personas feature encourages: customization. You might like a persona with your favorite pop star in the upper right corner, for instance, but the way your components are arranged now, a search box could cut right through her face. 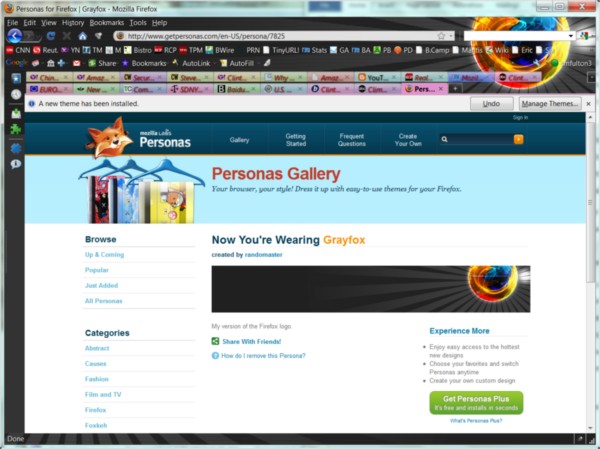 Here's one of my favorite personas in the early going, especially suitable for a "power user" (or abuser, depending on your point of view) who has a lot of active toolbar space: It's called "Grayfox," and it presents a striking, 3D-like "electric nebula" rendering of the Firefox logo set against a charcoal gray background. Greyed out or unavailable buttons, such as the "Stop" button, do show up faintly under this persona. However, it plays nicely with other add-ons: for instance, the grey pinstripes from the graphic are faintly visible beneath the rows of tabs made available with the Colorful Tabs add-on (downloadable separately from Mozilla).

While the Personas feature could pay off big for version 3.6, it may actually present a problem for developers working on 3.7 and the future Firefox 4.0. Both of those versions are expected to introduce progressively more streamlined window frames, enabling minimalism on a par with Google Chrome. Narrower space could mean less surface area to deploy Personas and other customizations -- a real estate problem that Mozilla contributors will now have to face head-on.

In late testing on pre-release builds of 3.6, Betanews estimated that users should expect between 10% and 15% improvement in computational performance (JavaScript, CSS, DHTML) over version 3.5.8, the latest stable revision to Firefox 3.5. We'll be testing the final 3.6 today to verify that estimate.

Mozilla typically enables the download link for the final stable version of its products as much as a day before it makes its official announcement to the public. This time the organization broke with tradition, however, by issuing its announcement just one hour after its public download links were established.
With version 3.5, Mozilla's engineers began building in support for browser-based HTML5 video -- a way to play back streaming movies without downloading anyone else's codecs as an attachment. Not Real's, not Adobe's, not Apple's. Version 3.6 expands that support by enabling HTML5 videos to be taken full-screen.

As if by coincidence (though probably not), YouTube this morning announced it will begin experimenting with support for HTML5 video. As of now, Firefox is the only major browser with HTML5 built-in; Google Chrome doesn't have it, and last year, Google engineers expressed some skepticism as to HTML5 video's efficacy. (YouTube is owned by Google, and currently prefers Adobe Flash video.) For YouTube to pull this off on a cross-platform basis, it needs to implement an experimental player that will display videos within a plug-in for all other browsers besides Firefox 3.5 and 3.6, while also triggering Firefox's internal HTML5 support.

UPDATE: For now, however, Google's experimental player will only run in the WebKit-based browsers Google Chrome and Apple Safari.

The need for this experimental technology may explain Google's purchase last year of On2, the firm responsible for the VP3 codec that was the basis for the Ogg Theora video codec currently adopted that had been under consideration for adoption by HTML5.

5:45 pm EST January 21, 2010 · If you've just started using Firefox 3.6 RTM and are wondering, where are some of those fancy new features you've been reading about...don't worry, they're there. For some reason, they're just not turned on. You have to make some about:config settings.

7:03 pm EST · Those of you wondering whether there's any real performance gains to be realized from Firefox 3.6, as opposed to window dressing, here's your answer: Preliminary tests on Windows 7 reveal as much as 20% performance gain from Firefox 3.6 over recent versions of Firefox 3.5, but that's not quite as big a gain as we're seeing with recent builds of 3.7.

Strengths and weaknesses: In deciphering page components rendered with CSS, code introduced in Firefox 3.6 and carried on into 3.7 appears to enable the browser to start rendering the first element of a page much faster than before -- even faster than Safari, which had been the speed champ in that division. The new browser runs the SunSpider battery of tests about 25% faster overall -- those are JavaScript tests that simulate everyday calculating functions. On the other side of the equation, version 3.6 is not particularly fast at rendering the 3D cube -- actually a tad slower than 3.5 -- and is processing raw text at what appears to be a 48% slower rate. That means streams of HTML are being processed after they've been loaded through the network, more slowly. All these data points will be verified in our more comprehensive tests to come.