Usually software companies have the luxury of picking their own deadlines, and typically -- especially in the case of open source or free programs -- those deadlines are allowed to slip or even lapse. But the European Commission gave Opera a solid opportunity to get back in the game, to be discussed once again in the same company as Mozilla Firefox, Google Chrome, and Apple Safari.

Version 10.2 wasn't going to do it. We saw that back in December, with performance scores that were falling below those from the stable Opera 10.1. Among those browser users who do take advantage of their choice, speed is becoming more and more of a factor, as evidenced by Chrome's rising usage share. So last January, Opera made a strategic gamble: Dump 10.2, and throw everything behind an effort to re-create the Opera desktop browser for speed and efficiency.

The main JavaScript processor engine, dubbed Carakan, is to the interpreter in Opera 10.1 what the Macintosh II was to the Apple II. They are worlds different. There is no reason for anyone today to use Opera 10.1; not to upgrade is about as sensible as hanging onto a 1975 Toyota Celica rather than accept a free 2010 Camry.

Yet there was indisputably a rush to the finish, and even then, developers spent an extra day past the March 1 deadline when Microsoft delivered its browser choice screen to European Internet Explorer users. The big question now is, amid the rush, was Opera 10.5 rushed, or like the hero from the movie Tucker: The Man and His Dream, did the company polish the front end and leave the chasses further down the line to be fixed later?

Some issues do remain. However, in our initial tests of the stable 10.5 this morning, the quirky drag-and-drop issues apparently were addressed. Selecting an item from the Bookmarks tab, then dragging it to the Personal bar, for instance, resulted in a copy (as opposed to a move) of that item -- not some other item, and not nothing at all. Selecting multiple items and moving them from folder to folder, worked. Dragging items to the Trash folder resulted in a move to the Trash (which makes more sense), followed by an opening of the Trash folder itself, enabling the user to empty the Trash in the next step. In all, drag-and-drop behaved consistently and as we expected -- the testing process worked in this instance, with the result being an improved browser. 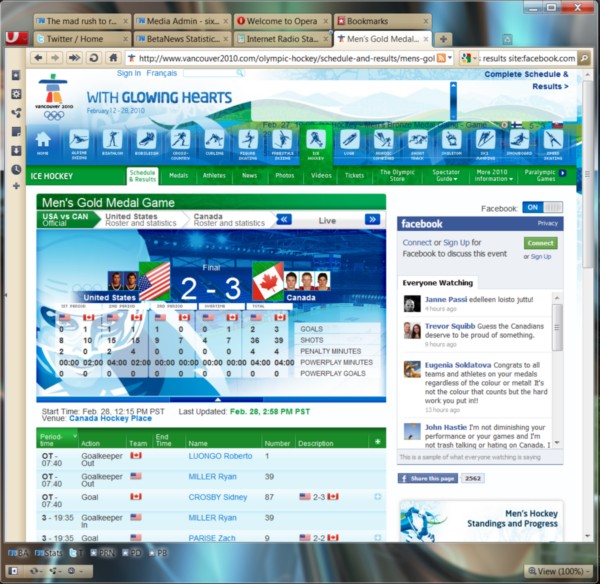 Improved, though not yet perfected, at this point are some of the layout discrepancies with complex CSS pages. We checked back in with the Olympic Hockey results page, which was first noted by an Opera 10.5 tester in a post to the company's blog responses over the weekend. The column from Facebook is perhaps most important, because it's the style of column that gets imported on thousands more pages than just this one. The stable Opera 10.5 now formats this column cleanly, so this fixes a multitude of pages to some extent. There's still some problems with the positioning of the medal count in the block reserved for it in the upper right corner -- it starts adding medalists beneath the bottom of the block rather than at the top of the interior. This is where developers tend to get into an argument over whether pages are actually developed to the Web standard, and whether the browser or the developer got it wrong. While all that arguing is going on, Firefox, IE, Chrome, and Safari users are reading this page just fine.

One user today noted a similar layout discrepancy on Opera's own multi-language portal page, which laid out two elements in the middle of one another rather than adjacent to one another. Opera appears to have addressed this issue by completely changing the layout of that page to something simpler for now.
Most of the messages to Opera's forum today consisted of congratulations, and very well augmented emoticons of support.

Our discussions with Opera Software representatives over the past few days give us the impression that there is a certain class of non-crash discrepancy that Opera's developers set aside, in an effort to focus on potential "showstoppers" that could delay the final release. By "delay," I don't mean the kind that could throw things off by a month or more (as has historically been the case with Firefox) but by an hour or two. During the Release Candidate stage (there was actually an RC5 prior to this morning's RTM), the company restricted its feedback to a narrower set of testers which, we're told, included those who responded to forums. We did get the impression, however, that commenters who complained of issues they claimed were unaddressed since version 9, were put aside along with the layout glitches, to be handled at a later time.

Problems were reported with upgrading Opera 10.1 to 10.5. Our advice is that such problems should be avoided by uninstalling Opera 10.1 first, then installing 10.5 fresh.

So what we're seeing -- if I may be allowed to continue my automotive analogy for a moment -- is a completely renewed chassis and much more horsepower in the engine, but some work remaining to be done with the upholstery. Still, Opera is back in the hunt. The final build of 10.5 did reclaim some of the performance numbers it lost during the heavily accelerated RC period, scoring a 21.66 in our Windows 7 performance index (21-and-two-thirds the relative performance of IE7 in Windows Vista SP2), which is 314% of the performance of its 10.1 predecessor. Google's fastest browser at the moment, its dev build 335.1 of Chrome 5, scores a 19.88 on the same decathlon of tests on the same machine.

In terms of computational speed, Opera is not yet the fastest, though it is disarmingly close -- as in, Julia Mancuso-to-Lindsey Vonn close. Opera 10.5 does have the fastest stable browser in the SunSpider battery, with a 68.64 relative score in Windows 7 compared to 58.55 for the latest stable Chrome 4 and 50.56 for the stable Safari 4. The Chrome 5 dev build just tops out at 69.83.

This morning, Opera 10.5 slipped past the stable Chrome 4 in the SlickSpeed CSS selectors test (even though its CSS rendering could use improvement), with an 11.64 score versus 11.54 for Chrome 4. The development builds of both Safari and Chrome, however, are faster.

Where Opera zips past the rest of the field at warp speed is in graphics performance, with a jaw-dropping 68.51 that is still better than double any other browser's score in the field, including development builds.

As of this moment, the Opera development team is sprucing up their final releases for Mac and Unix -- even with no sleep. But now, they have managed an incredible feat: They haven't just put Opera back on the map. They successfully diverted the focus of much of our attention during this critical period in history away from where it most likely would have, and perhaps rightly should have, gone -- from Firefox, the most popular alternative to IE -- to the brand that some analysts believe fell below 1% usage share. Just like Bjorn Ferry in the cross-country pursuit a few weeks ago, the Swedish team has come back to claim gold.

92 Responses to The new champion: Opera's all-or-nothing bid to build the best browser