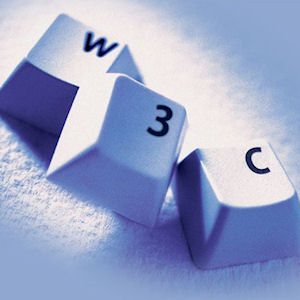 Should the next version of HTML, the Web standard that embodies how pages are laid out and constructed, include explicit specifications for inline, 2D dynamic graphics? There's valid arguments on both sides. One side believes that the ability to plot charts and animations would have been part of the original HTML standard anyway, had the technology existed on the back end in the beginning; giving HTML 2D graphics now, they say, plugs a hole left open for too long. Another believes the HTML5 standard should simply specify an API for plug-ins, to let separate groups of engineers evolve a methodology for plotting graphics at their own pace, and on their own track.

From one angle, the debate appears as innocuous as this: Should graphics be considered within the scope of a markup language, or not? But any debate on the topic of Web standards development has never sustained continued viewing from one angle alone. From another angle entirely, one can't help but notice that the principal advocate of letting the so-called Canvas element be developed separately, is an engineer with Adobe, which has more than the average stake in the outcome of Web graphics development.

When the Adobe stakeholder appears to agree with the co-chair of the working group, who hails from Microsoft; and the author of the would-be Working Draft document has ties to Google, it's not long before someone from Opera Software, quite literally, cries "Sabotage!"

Last month, among members of the W3C's HTML5 Working Group, a dispute arose over whether the Working Group had the authority to declare the specifications for the Canvas element (not just the plug-in, but the component itself) part of HTML5. Adobe engineer Larry Masinter raised the point that he believed the decision had already been made to split Canvas 2D into its own First Public Working Draft (FPWD).

Indeed, there was evidence to back Masinter up on this point, as other W3C participants were either working under the belief that Canvas 2D was on its own track, or noting that a dispute on that issue had yet to be resolved. During a W3C presentation last month, long-time project leader Philippe Le Hégaret acknowledged that a specific difficulty remained before the Last Call Working Draft -- the next-to-last stage on the diagram he was showing the audience -- could be completed.

"If you take a specification like the HTML5 specification, it's still in the Working Draft status," reads Yahoo's official transcript of the presentation. "We still have several open issues opened against the document. In particular, several accessibility issues that need to be resolved before we can move the document to Last Call."

By "accessibility," Le Hégaret was using a keyword in the argument in favor of breaking Canvas out from HTML5: that letting a separate group handle it at its own speed, would make Canvas more accessible to its own developers.

In an interview published by the W3C just last Friday, Le Hégaret corresponded with HTML5 Working Group Co-chair Paul Cotton, who also manages Web Services Standards Strategy for Microsoft Canada. In an obviously leading question (like I've never asked a leading question myself), Le Hégaret asked Cotton to explain what HTML5 has evolved to become, in the broad sense. "I agree that many of us use the term 'HTML5' very loosely," began Cotton's response, obviously agreeing with someone in the room.

"First, I believe that most people use the term 'HTML5' to refer to the HTML5 specification currently being worked on by the HTML WG," he continued. "The HTML5 specification defines the syntax and the semantics of the elements and attributes in the HTML markup language and several of the APIs that are used to process HTML documents. Recently the HTML WG has started to break the HTML5 specification into more modular and separate Working Drafts -- e.g., HTML+RDFa, HTML Microdata, and HTML Canvas 2D Context. The HTML WG is also publishing two additional documents to aid users of HTML5: the HTML5 differences from HTML4 specification and HTML: The Markup Language which is aimed at developers that produce HTML5 output. Each of these additional Working Drafts are still part of 'HTML5' and are all on track to become separate but related W3C Recommendations or Working Group Notes. I believe that the content of these WDs taken together will define the part of 'HTML5' being worked on by the HTML WG."

That's how Microsoft's participant described the situation just last Friday.
Last February 5, in the Working Group's public mailing list, Adobe's Masinter made it clear he believed Canvas 2D was being split into a separate Working Draft document, and that he disagreed with others' assessment that the WG's own director could somehow also include it concurrently within HTML5.

A diagram of the typical evolutionary process of a W3C Working Draft, from a February 2010 presentation by HTML5 Working Group member Philippe Le Hégaret.

The following Monday, it appeared as though Le Hégaret sided with the gathering consensus that Canvas is essentially already part of the understood scope of the broader document. However, he did suggest a kind of intermediate solution: the document modularization concept. "The scope of the [Working Group] charter says: 'This group will maintain and produce incremental revisions to the HTML specification,' and the deliverables indicates: 'a language evolved from HTML4 for describing the semantics of documents and applications on the World Wide Web.' I don't think it sets boundaries on what ought to be part of the HTML specification. Whether the figure, video, or data-* is inside the HTML5 specification or in an adjunct doesn't make a difference. We've been encouraged on several occasions to modularize the HTML specification itself, in fact. The Context 2D API was part of the HTML5 specification even before the creation of the charter and was accepted as such by the Working Group."

As the minutes of the public meeting of the Working Group from the following Thursday, February 11, indicate, when one of the meeting co-chairs -- Microsoft's Paul Cotton -- stated that the requested changes (the "diffs") were being worked into the Call for Consensus document -- implying that all was going swimmingly -- Adobe's Masinter interrupted. "Do I need to repeat objections?" he asked. "The co-chairs are aware of the formal objection," Cotton responded.

But here, Le Hégaret made a bold statement: "We won't approve the [First Public Working Drafts] until the [Formal Objection] is resolved." What formal objection? Wasn't there a dispute over whether there even was an objection? Cotton asked Masinter and Le Hégaret to forward their objections to the public list for everyone to read; they agreed.

Next: The search for a conspiracy theory...