Microsoft cuts and pastes an egg

Ever since she brought me into the world, my mother has taught me many things, namely to not only learn from my own mistakes, but also from the mistakes of others.

Microsoft clearly never spoke to my mom, as evidenced by its decision to leave cut, copy, and paste capabilities out of the new Windows Phone 7 Series platform, at least in the early rounds. If they had paid Mom a visit, they would have been told -- after being offered some tea, of course -- to fix all the boo-boos of earlier smartphone operating systems before releasing their own updated version. She would have advised them to understand the rough spots encountered by competitive offerings, and do everything in their power to avoid them.

I think my mom's ticked with Microsoft

Okay, perhaps she wouldn't have worded it precisely that way, but I'm certain you get my point regardless. I'm sure I speak for my mother (and likely, a whole bunch of you, too) when I say I'm disappointed in what may either be Microsoft's "decision" to leave three of the most basic functions in the history of computing out of its just-announced OS, or as we seem to be learning now, it's having overlooked the whole subject in the planning phase.

This morning, blogger Long Zheng reports he was told by Microsoft that cut and paste is something the company hopes will find a place in Windows Phone 7 Series at some future point.

Now, the initial excuse the company provided was (and is, and quite likely always will be) insufficient and, if we're being brutally honest, more than a little arrogant: "Most users, including Office users, don't really need clipboard functionality." So what's the story now, after Long's report: "We asked users to give us some details, and they decided, most users do like clipboard functionality, just not right at first?"

While I realize OS vendors have to make countless decisions about which features should and should not make it into the final product, I bristle at Microsoft's tone -- a bit like US Congresspeople explaining why the public option for health care is a really, really, really good idea, but just not for the bill being discussed today. If Microsoft (or, for that matter, if anyone at all) can learn anything from Congress this year, it's that people don't like being told by The Powers On High what they are supposed to want or not want, and when.

It isn't Microsoft's place to tell users that they won't ever need to cut, copy, or paste anything for as long as they own their new devices. It's the kind of blow-off statement that sounds shockingly like Apple when it introduced the iPhone in 2007, similarly stripped of any ability to cut-and-paste. After a sea of complaints from users and reviewers who actually do know what they want, and don't need to be told, Apple wisely retro-baked that functionality back into the OS two years later. While the controversy didn't seem to dent Apple's market share, Microsoft hardly has the benefit of Apple's marketing prowess or brand equity.

Apple aficionados were willing to cut the company some slack, and ended up buying iPhones anyway. Microsoft aficionados are a lot harder to find, they won't line up around the block in the middle of the night, and they'll probably pick up an Android-powered device as an alternative. With Windows Mobile...oops, Classic devices retaining this feature, and Windows Phone 7 Series lacking it, the inconsistency is difficult to understand. However you slice it, there will be no slack for Windows Phone 7 Series, and it's more than a little shocking that Microsoft couldn't see this coming.

Teaching us all a lesson?

In fairness to Microsoft, its new mobile OS includes a data detection service that automatically recognizes common elements like addresses and phone numbers. Within this context, perhaps there's room to make the argument that cutting and pasting is yesterday's news. This technology, popularized with the first mass-market GUIs in the early '80s, and perpetuated in virtually every desktop and mobile OS ever since, could be one of those things that we hold on to like a security blanket. And like the ratty old blanket, perhaps there's a time when we need to let go. Maybe, just maybe, Microsoft is doing us all a favor by pushing it out the door.

But consumers are a fickle lot. And what makes sense from a strategic or historical perspective isn't necessarily right from the point of view of the guy forking over the dough for your new wonder-product. Never mind that Microsoft may, in fact, be "right" in concluding that we no longer need cut, copy, and paste on our mobile devices. Customers, after all, are always right, even if their choices make them look like circus clowns who do their makeup in the dark. It's their mistake to make and their shame to live down. Even if the vendor believes otherwise, it's not the smartest business strategy to call them idiots and make fun of their smudged face paint. 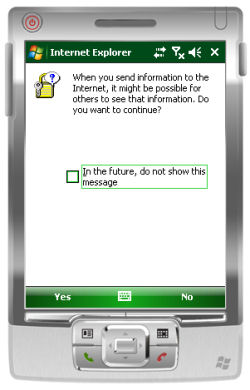 Casting off a legacy

In fairness to Microsoft, I somewhat understand where the company is coming from. Previous versions of its mobile OS suffered from what I like to call Shrunken Windows Syndrome. Instead of being built from the ground up as truly mobile-enabled solutions, they seemed to be pared-down versions of Microsoft's flagship desktop OS products. Microsoft's philosophy seemed to be that if it worked on a PC, it would work on a smartphone or a PDA, too. I used a number of Windows CE and Mobile devices over the years, and I never got used to navigating a full-on Start menu, complete with cascading sub-menus, with a stylus or thumb keyboard. It was as if Microsoft never actually used its own mobile products out in the field, and never listened to users who complained bitterly that its design philosophy simply didn't work out there.

With Windows Phone 7 Series, Microsoft seems to have finally gotten the mobile message. It's built from the ground up as a modern, competitive, lean and efficient mobile OS. I suspect the cut-and-paste omission is the company's way of overcompensating for years of heavy Windows legacy on its mobile products, a hackneyed way to break with its past.

Memo to Redmond: There are other ways to accomplish this.

If Long Zheng's reporting is accurate (and it often is), I'd wager that v7.1 will have copy and paste...that is, if Microsoft doesn't cave to the firestorm earlier and release it as an on-the-fly fix. Either way, the only way Microsoft will ever gain traction in the mobile OS market is by listening to both customers and prospective customers and integrating their suggestions -- well, the value-added ones, at least -- into successive generations of their product.

This is a gaffe Microsoft simply can't afford. Its mobile OS is in the fight of its life as Microsoft battles the Apple/Google/RIM juggernaut on one hand and its own declining mobile market share on the other. Beyond the numbers, there's the risk that the market has already given up on Microsoft succeeding as a mobile vendor. That psychological factor (something Palm knows all too well) is something Microsoft needs to fix by reinstating cut-and-paste support. Now wouldn't be soon enough.

31 Responses to Microsoft cuts and pastes an egg