Swype and T9 Trace are on a collision course

You may not know the name Nuance Communications, but you can bet you've used this company's products. It deals with linguistic solutions in the health care, enterprise, and the consumer mobile spaces. If you were to know the company for anything, though, you'd probably know Nuance as the company that owns T9 text completion, which ships on 85% of all mobile phones.

You may also not know the name Cliff Kushler, but he was one of the inventors of T9 at Tegic Communications. He went on from there to launch the company Swype after Nuance acquired Tegic in 2007.

Swype offers a new method of text entry that lets a user drag his finger to each letter on a virtual keyboard, rather than have to peck each letter out. It has been getting a lot of positive press, and has appeared as a pack-in feature on two new Android handsets this week -- the impressive Samsung Galaxy S and the Motorola i1 -- as well as the Windows Mobile-powered HTC HD2 which just launched on T-Mobile. 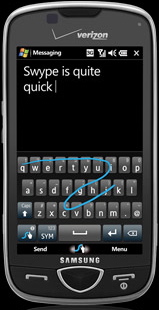 This week, Nuance announced its new method of text entry called T9 Trace, which is pretty much exactly the same as Swype. Both Nuance and Swype market their products directly to OEMs rather than fiddle with the consumer app space, so the name of the game for them is getting as many manufacturers to pick up their technology, and establishing ubiquity.

Swype is doing pretty well in terms of partnerships so far, and Nuance hasn't announced any yet. Nuance hopes to grab OEMs by offering the same input technology as Swype, only integrated into some of their other intellectual properties.

"We'll go through OEMs and do hybrid interfaces with some of our connected services such as Dragon Dictation," Richard Mack, VP of corporate communications for Nuance said yesterday. "If you wanted to go in there and edit, you can call up the keyboard and do Trace there, so we're beginning to integrate all these into a combination, multi-modal experience for text information input." 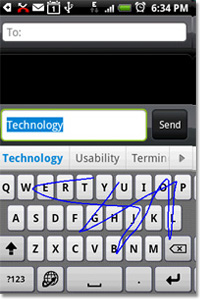 In other words, manufacturers who already license T9 will be able to get a package licensing deal with Nuance for Trace and whatever other technologies they want.

"We've also got a higher number of languages than anyone else out there [80], integration time is much easier because it can be built on top of T9 which is already there," Mack said. Truly, when I tried T9 Trace yesterday, the words that popped up in the suggestion list were rather consistently in Italian.

But really, the way T9 Trace and Swype work is secondary to the way their stories could end. After all, Swype is a small company still working on Series B investment capital, but with significant interest from OEMs. Also, Nuance is a big company with a long list of clients, no T9 Trace partners yet, and history of buying up Kushler's technology.

I would be remiss to say Nuance is copying Swype...that's for you to decide. Either way, Kushler and Nuance look to be coming to a meeting point again, and it could be the bargaining table or it could be the courtroom.