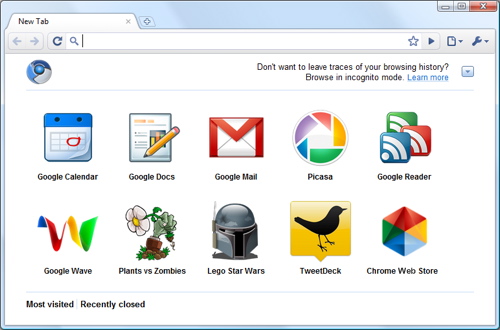 Google has announced the upcoming availability of the Chrome Web Store, an open marketplace similar to the Android Market or iTunes App Store that deals exclusively in Web Apps.

This store doesn't exist yet, but will open both to developers and to users "later this year."

The store will deal in the "installable Web apps," that are expected to populate both the Google Chrome browser and the forthcoming Chrome OS. They can be run currently, but require a Windows Dev channel release of Google Chrome with a special command line flag.

According to their Google Code listing, "An installed web app could be separated visually from other tabs, could integrate better with the OS, and could be granted increased permissions. This special handling of web apps is exactly what we're working on in Google Chrome...Installing a web app in Google Chrome is easy and quick, with no restart required. At its simplest, installing a web app is like creating a super-bookmark to it."

Interested developers can check out the preliminary documentation and join the discussion in the Google Group for Chromium Apps.