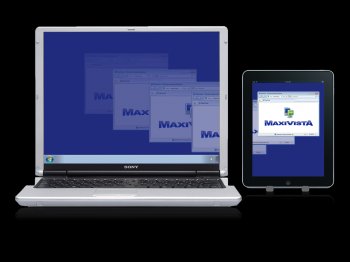 Windows users can now use the Apple iPad as a wireless display extension with a software package released in beta today called MaxiVista from German software company Bartels Media.

MaxiVista's multi-monitor software lets users extend their desktop across other PCs and Notebooks, and utilizes a special data compression so the CPU and network load stay low. While the frame rate isn't exactly good enough to handle video playback or gaming, it is useful for non-graphically intensive applications, and it doesn't require any unique hardware.

For MaxiVista to function, users must download a $9.99 iPad application. The Windows part of the software is free, and video drivers are compatible with both 32 and 64 Bit operating systems. Interestingly, there is not a version yet compatible with OS X, but it is reportedly on the way.